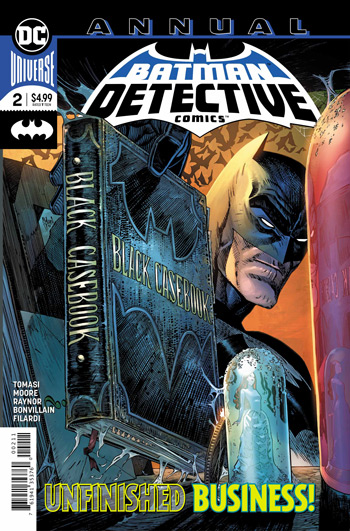 I was so excited when I saw what this issue is about.

The Reaper is back! He is one of my favorite underutilized villains in the DC Universe. I couldn’t believe it. And then I found out the book is written by Peter J. Tomasi, who is knocking it out of the park currently on Detective Comics! I couldn’t wait to dig into this!

We start off in Paris, France. We see The Reaper cause a brutal murder. In just two pages, this team sets up an intriguing issue. That is followed up by another brutal murder which The Reaper just says “Justice is Served.”

Man, I had no idea what the hell what going on, but I was hooked! This is how you start off a comic book!

After this, we head back over to Gotham City. We see Batman make short work of a criminal. He then meets up with Commissioner Gordon. They have a conversation and Batman learns about the resurrection of The Reaper. Bruce then heads home and brings out the Black Casebook. That’s when things in the issue just shift into overdrive.

Bruce decides to head to Paris to investigate what is going on. There is a little bit of investigating. All of it is very intriguing. Then, after a bit of build up, we get to see Batman go right on up against The Reaper. And when they finally cross paths, I wanted to cheer.

Tomasi writes another great tale. This is one of my favorite issues of the year. The art is also very good and well done. The only thing that made me sad, is that we had to wait a real long time for another Reaper story. I hope the wait to the next one isn’t so long. He’s a great villain that should be utilized more and it’s a shame that he isn’t.

I hope that this issue changes that.