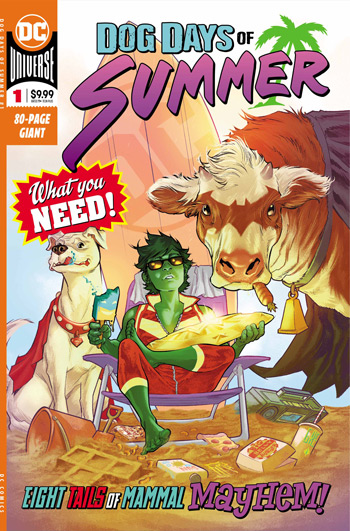 Written and Illustrated by Various
Published by DC Comics

Sometimes, an assignment just ‘gets me’. And this week’s single issue comic review has me kicking back in my mind to those days at Cape Cod in the dead of summer with nothing but a walk to the beach or into the center of town for some good spinner rack perusal.

When you get back to your bunk bed you share with your cousin, you ask if he’s done with that issue of Spider-Man yet as you close your G.I. Joe. The modern equivalent of this feeling is in DC Comics’ latest 80-Page Giant, Dog Days of Summer #1.

My predilection for preferring 8 page story anthology comics to the monthly adventures of Hero X notwithstanding, the clincher for me was the cover. Beast Boy, Krypto and Bat-Cow are just chillin’ on a beach somewhere, exactly where I want to be in my mind.

Star Trek: Year Five writers Kelley and Lanzing team up with Cully Hamner for a Superman and Krypto story that show that allows Krypto to be the star of the show, his loyalty to Superman being the key to dismantling a sentient satellite bound to take over Earth. This was the best use of Krypto in a long time, by putting him center stage.

The Flash writer Joshua Williamson follows up with another animal-themed backup starring Killer Croc. He’s escaped from Arkham, only to confront someone he used to run with in the past. Will his killer instinct take over before Bats takes him back to his padded cell? Find out here!

Superheroes seem to spend a lot of time around pools and pool parties, that is if we are to believe our next story and 1991’s X-Men Pool Party. Ferdinand The Bull is serving up burgers and dogs to his volleyball playing Justice Leaguers but when he finds the tradition to be cannibalistic, his search for an Impossible Burger substitute unleashes a simulacrum bull that isn’t exactly meat, but is terrifying. Good thing Diana was keeping an eye on the fake meat lab all along!

The multiverse explodes with an Extreme Studios version of Captain Carrot in Crisis on Earth-26! This was more Looney Toons than DC, but for a summertime comic story starring Captain Carrot and Atomic Batman, do you really need anything else? Bring on the nonsense!

Animal Man gets a quickie here too, protecting his family from an unseen beast on their family vacation. Art by Christian Duce is clearly a standout here in this compilation, and the story is great too!

Animal Lantern (don’t call him a cat?) Dex-Starr gets his due in Tourist Season, taking on a crew of hunters.

Bat-Cow gets their time in the spotlight here, her first heroic outing since the Batman Incorporated days (if I remember correctly). Dan Didio does what he does best (See the volume of Wednesday Comics with The Metal Men, celebrating 10 years this year somehow!), dipping into the bizarre and silly of the DC Universe and churning out a delightful story that is a parallel to Batman Vs. Joker except with inside of a rodeo. She’s a cow of few words, and those words may start and end with “Moo”. This was easily my favorite tale in the special.

The final story wraps up with Beast Boy on the beach unleashing his inner Charles Atlas, refusing to have sand kicked in his face by some dumb jock. Don’t you hate sand? X-23‘s Mariko Tamaki wrote this tale with newcomer Cian Tormey on art.

This is a guaranteed good investment with a $9.99 cover price, and leave it with all of the other books at your vacation spot when you are done. Let some future kid or time traveling alien get delighted by the joy of reading comics with this summer special edition!