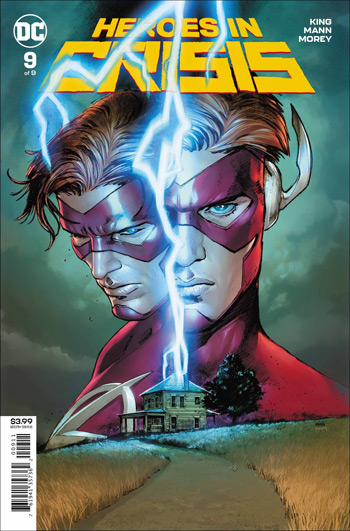 So, now that we’ve had a month to come to terms with the revelations of last issue, with all the convoluted super-mechanics involved in what went down, I’m going on record to say that I really liked this final issue of Heroes in Crisis. And Tom King’s whole landmark series in general.

Call it what it is: An outstanding piece of work.

That said, if you were hoping for things to be less convoluted for the finale, sorry. Because it’s a mind-bender no doubt.

You’ve been warned. Ah, time-travel. Makes the head hurt sometimes. Good thing we have Booster Gold on the case to help smooth things out. (Because of course he does.)

Even so, the resolution of King’s nine issue character-driven hard-boiler relies on some pretty creative comic book logic to provide us with a resolution that ends on a far better note than you might otherwise imagine, given what we’ve seen so far.

But really, are we surprised? We are not.

There’s a lot of controversy out there about this series, and it’s wrap -up, not only because of what it means for the legacy of Wally West, (much less for Roy Harper), but also because of all those aforementioned super-mechanics. And I get it.

But even if you don’t fully agree with Tom King’s choices, you have to admit it’s all pretty damn smart.

The super-mechanics alone prove that. There’s also a very satisfying final issue glut of hero-therapy snapshots, in the montage style this series has used already to such great effect, one that gives us a sign-off glimpse into a wide range of our favorite DC characters. Proving once again that King shows a remarkable grasp of these characters, and what really makes them tick.

(And I’m going to interrupt myself here, to say that this issue comments on two separate DC continuity questions I’ve had lately. And both comments make me very happy. The first is a strong confirmation, finally, that a certain New Teen Titans era is no longer lost to us in the current DC continuity. The second suggests something much the same about the JLA of Maxwell Lord. Which certainly is… interesting. All things considered. But moving on.)

There’s an interview out there in which King mentions that one of his inspirations for this whole series concept, has been the regular advent of school shootings in our American society of late. Wally’s loss of control, and the consequences of that, are meant in part to be a nod to this new development in our lives. The possibility – the reality, really – of the occurrence of random senseless violence, in places that we equate with safety, respite, and protection.

Which is not a completely fair analogy, thankfully. It’s not just apples to apples. Wally’s own loss of control, for one thing, is done with no intent to harm. Not so far as I could tell anyway.

I’ll leave what happens to Wally to your own reading enjoyment. But suffice to say, time travel-assisted suicide is not so easy when you have friends on your side, super-friends no less, who are looking out for you. And when one of those friends is an older and wiser version of yourself…

How often have we wished for the sort of heart-to-heart with yourself, that only the benefit of hindsight provides?

Well, hopefully this is exactly what Tom King has provided, for any of his readers out there now for whom the pressures of living, and the alienated isolation and pain they may contend with daily, might also, tragically, spark their own, momentary lapse of judgment. Or control. One with consequences that can never be taken back.

So maybe that’s a damn smart message to be making, after all. For all that it’s hard for us to accept the consequences that come with it.

One thing’s for sure, it certainly packs an emotional wallop.

As for our core team rescue-squad – Harley, Batgirl, Beetle, and Booster… ? Well it turns out there’s a reason King settled on these four to save the day. In the end they’re ideally suited to it. In more ways than one.

And I, for one appreciate it. In fact, I appreciate it all very much. I’m old-school. There will always be a place in my heart for an era of JLA greatness that brought Wally, Ted, and Booster together for the greatest adventure of their lives.

The fact that somewhere a slice of that continuity still exists, warms my heart very much. For all that, going forward, things can never really be the same again.

(And honestly, I’m still not sure that it can even make sense. Except, you know… comic book logic. It never lets you down.)

Whatever the case may be – or may yet end up being – at the end of this chapter anyway, there’s a moment here in the closing, one that makes it almost all worthwhile. A moment when two time-lost heroes, two brothers-in-arms, share in the burden of their screwy, crazy, messed up world. A world that’s been forever changed. One that no longer makes any sense to them. One they have no choice but to live with, nonetheless.

Maybe that’s exactly the message we need. Because no matter how crazy that world has become, for them, or for us – somehow that little bit of connection makes it all, a little better.

Final shout out to the inestimable Clay Mann, Tomeu Morey, Mitch Gerads, Travis Moore, Lee Weeks, Ryan Sook, Layton Cowles, and the whole production crew, on a damn excellent job, month after month, all the way around the room.

Next Up: I mean, hey, I’m thrilled about the newly announced Batman/Catwoman series… but how about a new, classic Titans run, Tom? Seems to me you owe us one. For that matter, maybe make it Justice League X.