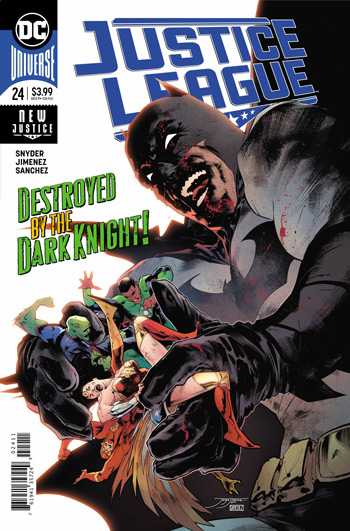 “Sorry Barry. But it’s time to imagine a different ending.”

Yeah, still not buying it.

Though it’s looking worse and worse, I admit.

The premise of our current Justice League challenge is that the totalitarian utopian world of the new Justice League of the Future has only comes to pass – and can only come to pass in prime reality – if Batman betrays his core principles in the name of winning.

It’s quite a set up, and more than a moderate burden to place on the shoulders of one hero. But the World Forger has come to the belief that only through this unfolding of events can the Universe achieve the increasingly elusive ‘justice formation’ it needs, to one day be deemed worthy by the mysterious Lords of the Omniverse.

Again and again, the Forger claims, the success of this solution comes down to a conflict between Superman and Batman. Again and again, Batman’s choice to save the many at the expense of the broken, puts him at odds with the greatest champion of all humanity. And again and again, so we are told, Batman’s victory is the only path that ensures the survival of the Multiverse.

The reality in which this has already happened, is the recently forged future-universe that the League finds themselves in now. And the World Forger is now on the verge of completely overwriting prime reality with its beautiful golden nightmare.

He’s taken Superman completely off the board, locked away in a pocket dimension of darkness, where he cannot influence his friends.

He’s enlisted the 5th dimensional Superman-imp Mr. Mxyzptlk to erase reality-prime – currently being combated by Bat-Mite outside the Hall of Justice in a rather clever juxtaposition of iconic confrontation.

And he’s giving Batman the keys to the Kingdom. Pretty much literally.

You see, for some reason, none of the World Forger’s preparations will come to pass unless our Batman can convince the rest of the League to join him in this mad future-vision of universal salvation.

Unfortunately for the World Forger, the rest of the League has already teamed up with a ragtag freedom squad of former Future Legion of Doomers, who are dead set against seeing their past be rewritten and their own destinies subjected to the wars and defeats of their current history.

And with their help – somewhat overly-schmaltzy though it becomes (with Darkseid playing a pretty upbeat Han Solo, no less) – the League comes to see the true horror of this world, and stand ready to oppose it with all their strength.

Fortunately for the World Forger however, he has an ace up his sleeve. And that ace is a godlike wonder tech invented by this world’s Batman, one that will allow our Batman to literally rewrite the minds of anyone, including his old friends, to get on board with the program. Never mind that it’s at the expense of their deepest held convictions. And their free will.

As long as Batman is on board that is.

Now look, there’s all manner of Moebius-type narrative pitfalls to this, and various inconsistencies with the set-up – not the least of which being, why there are even any villains or dissenters in this reality at all, if such a tech exists – but at its core, author Scott Snyder’s premise is a neat idea, and it does set up a fairly off-the-charts moral conundrum for Batman to grapple with. And the whole thing is executed beautifully with Jorge Jimenez’s pencils. (Man, that guy does a good Batman.)

So my advice is just let it all slide, and enjoy the pay-off that’s sure to come.

Because there’s one big difference between our Batman and the Batman of the far-future shadow reality that became the architect of this mess. Our Batman hasn’t had his ideals crushed by the weight of the League’s coming conflict with Perpetua and Luthor. Not yet.

Or anyway… we hope not.

We’ll see. But me, I’m banking on the idea that Batman likes to think outside the box.

Like a box suggesting that the only good use of a godlike mind-wiping tech is to betray his friends.

Or a box that insists that out of an infinite number of possibilities only a scenario that puts him at odds with Superman can possibly succeed.

I mean isn’t the point that we get to choose our happy ending… and then find the way to create it from there?

Next Issue: Come away from the Dark Side, Bruce.