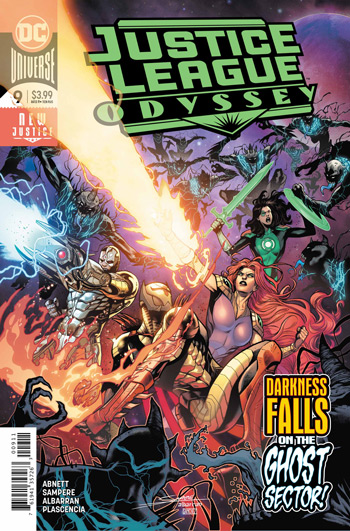 “I despise Darkseid. I do. But he chose us. And with all life on the line… can we afford not to work with him?”

This issue in many ways feels like a tipping point. And I think it’s meant to.

Up till now, the overall team consensus regarding the prospect of working with Darkseid has been understandably negative.

Each of our team members, (aside from tag-along, and cautionary nay-sayer, Green Lantern Jessica Cruz), have their reasons.

Azrael, of course, has just received a major power upgrade.

Last issue, the mysterious inner voice that guided him to stowaway with Cyborg and Starfire on their trip to destiny, lit within him from a spark to a flame. Now the astonishing influence of his own voice is strong enough to stop an armada in its tracks, command the loyalty of those who had turned away from him in disdain, and even quell Blackfire’s infamous passions.

No wonder then, he might feel he’s become an instrument of divine order. With little reason to question that guidance…

Starfire is convinced that Darkseid’s cosmic arc, Sepulkore, is the best chance for saving lives, in the face of DC’s multiversal destruction.

Of course, Kory’s been possessed with an unknown power herself for several issues now. One that has completely overtaken her on at least one occasion. And whatever her motivations, she certainly does seem to have developed a certain, odd, giddy fervor about seeing Darkseid’s plan come to fruition…

And Vic? Cyborg? Well after a little Indiana Jones action this month, (facing off against a bit more than a pit of snakes I might add), Vic claims the third relic of Darkseid’s treasure hunt, and with it, a major upgrade of his own.

With that, he also gets a serious data dump, one that opens his eyes apparently to the veracity of Darkseid’s full master plan. It’s enough to convince him that while (certainly) they shouldn’t trust Darkseid, they should at least help him achieve his objective… if only for their own purposes.

And the others seem to agree. Well, all except Jessica Cruz.

None of them trust Darkseid. Or so they say.

But now, suddenly, our three divinely Chosen Ones seem to be on board with the plan, with far less concern about how they all ended up in this place, than maybe they ought to have.

Leaving Green Lantern to wonder if, really, she can any longer completely trust them.

Between the swiftly turning stand-off against the Azraelites and the Tamaraneans, and Vic’s battle against Braniac’s co-opted alien beasties, there’s both drama and action in this issue. But mostly this is backdrop to the shift in tone that our characters seem to have engaged regarding their role in Darkseid’s agenda.

There’s a danger in that sounding perfunctory. Like, we knew this was going to happen all along. But it’s a testament to Dan Abnett’s writing chops that he so smoothly interblends our character’s dialogue so that each one seem to genuinely agree that they must oppose Darkseid’s ultimate intentions… with more than a few hints throughout that they are gradually coming to abide with them, despite so.

It’s a neat narrative trick, and it works well.

We’ll see how long it takes before the Three are actively preventing Green Lantern from taking any steps to prevent their rise to power in the Ghost Sector. Not that she has much power to work with…

The book is also well served with the current artistic team. Daniel Sampere is an able talent on pencils, providing plenty of heroic posture and action. (Though I still really want to see more luxurious heads of hair on Koriand’r and Kommand’r, than we have for some time now).

However, It’s the inks of Juan Alberran and the colors of Ivan Plasencia that really stand out for me this month.

So much of the evolution of digital art in comics can be clunky and unsatisfying. Choices about which lines to ink and color too often wash out the talented efforts of the penciller.

Not with these two. Between them, Alberran and Plascencia, hold the integrity of the images on the page in fine balance. And Plasencia in particular really is using his palettes to wonderful effect.

I’m sure we’re in for more alien oddities, landscapes, and dangers for these guys to tackle in the months ahead. As well as a certain pre-ordained Ghost Sector War that seems pretty likely to come to pass now that everyone is going to start taking sides…

Next Issue: “No evil shall escape my sight.”