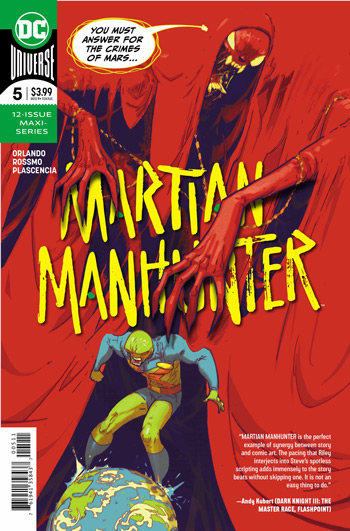 “I will not be broken by the likes of you! I will not succumb! My mind will persevere, even as my brothers go mad in these living cells you’ve built for us!  I will survive your judgment… I will see the Manhunters again!”

This month we learn that this isn’t quite true.

For while Cha’rnn, indeed has announced his presence – with a dramatic psychic assault that leaves J’onn covered in the boils of H’ronemeer’s Curse – it turns out that J’onn cannot actually see his attacker.

That’s because Cha’rnn is powerful. An even more powerful telepath than our resident DC telepathic champion.

Apparently Martian psychic powers develop with age. And while J’onn finds himself on Earth after being plucked from the timestream and being catapulted across millennia to our own era, Cha’rnn has lived all of that time, locked in a body-form his jailors condemned him to long ago for his crimes, persisting through the sheer force of will down through the ages until fate gave him one last chance to exact revenge on his mortal enemy, the Martian Manhunters.

It’s a clever twist, quite brilliant really. Not only does this provide J’onn with an enemy from his past – a Martian , and a red Martian no less – but that enemy, it turns out, is significantly more powerful than a character that has been regarded for some time as being one of DC’s A-list power hitters.

And that means Cha’rnn has full access to J’onn’s mind. An almost unheard-of advantage, one that exposes all of J’onn’s history and his secrets, and also allows for some… surprising rules of engagement.

There’s a benefit for us too, unfortunate as the whole thing is for our favorite alien refugee.

Because that history and those secrets keeps our narrative nicely focused on the story of J’onn’s former life on Mars. A neat trick, but exactly the sort of deft storytelling that Steve Orlando has been developing a reputation for. And it works. The interwoven strands of the story continue to build with unexpected significance, along with a powerful myth-making effect that this character has long deserved.

There’s another consequence to Martian Manhunter’s current predicament, one that is just as satisfying. Because after a first encounter with Charnn one thing is abundantly clear to J’onn: he needs help.

And that means reaching out to his partner Diane Meade, who doesn’t trust him, doesn’t like him, but maybe needs his help too, more than she’d like to admit.

Diane is no wallflower, and she does not keep her feelings to herself. A fact made clear in several vignettes that flesh out Detective Meade’s character in important (and enjoyable) ways.

And artist Riley Rossmo takes each one as yet another opportunity to demonstrate superb storytelling chops that seem tailor-made to support Orlando’s own.

The whole issue is a joy to read – perhaps the best in the series to date.

Can’t recommend this book enough folks. It’s a triumph. One that keeps getting better.

Next Issue: Good in the box together.