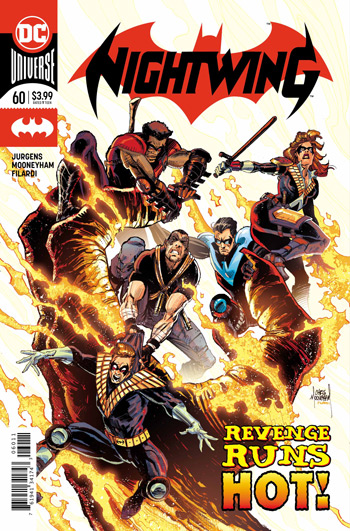 The introductions of the “Nightwings” has been a great little twist on this series. It’s a little goofy but it has led to some incredible moments the last few issues. This issue continues their story and I was strangely compelled by the story that the creative team was telling.

The opening scene has the Nightwings, led by Alphonse Sapienza, going against a fire based creature. We get to hear what “Ric” Grayson calls them individually. He calls one Nightwing Prime(Sapienza) as their leader. He calls another Nightwing Red. And t hrough this lens, we get to see Joan Ric feels about the Nightwings.

Jurgens does a nice job writing this part and makes everything seem fluid.

Eventually, the team takes down this creature.

Then, something really great happens. We get to see the Nightwings talking about just why they dress up and play hero.

It’s a pretty impressive scene and it really hits you square in the chest. It’s well done.

Then, we get a nice scene with Ric and Bea meeting up. It’s very nicely handled and we get to see that these two have fallen for each other. Bea’s story however, eventually plays a bigger part of the narrative.

We get to also see a little more of the mystery of just who is burning down precinct houses. By the end of the issue, we are left with an explosive cliffhanger and a kind of strange surprise. It’ll be interesting to see where it goes from here.

Chris Mooneyham is doing some amazing work on this title. He’s one of the best artists that DC has in their arsenal. His storytelling is top notch and his figure drawing is exemplary. I look forward to more work for him. He takes the interesting script from Jurgens and really brings it home.