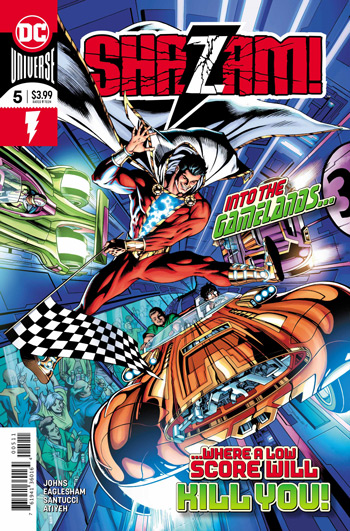 I would be hard pressed to find a worse version of Captain Marvel than this comic book.

Geoff Johns is a generally capable writer and so that makes this book even more disappointing to read. What should feel like a fast and fun read is bogged down in utter confusion and boring choices. This could be a thousand times better than this.

The issue starts off with Black Adam infiltrating the Rock of Eternity. He shows up and goes crazy. He starts destroying everything in a dramatic fashion and basically screams. I have no idea why he’s so upset but he basically announces that is is going after the Batson gang!

From there, we go to the magical land where Captain Marvel is trying to rescue his family and get them out of this place. But he’s captured with the rest of them. He sits as a captive and listens to some of the bad people pontificate. Then, he decides to act upon a plan.

He decides to upset the villain and this causes him to break free! Mary Marvel then gets to say “Shazam!” and then they decide to get the other family members and get out of this crazy land. I’ve never seen a plot be so simple and yet at the same time, so damn confusing.

The rest of the issue is pretty nuts. We get to see Tawny in the land. We get to see a lot of animal-like beings have conversations. It all leads to a whole lot of nothing and at the end I was just confused and bored. Geoff Johns can do better than this.

By the end of the book, Black Adam meets up with Dr Sivana. I was done at this point. I had a headache.

Yes, I get it.  The two are going to be a threat to the Shazam family. I wish they just got on with it already at this point.

There are four artists on the issue. I’m not sure why but it’s pointless and very inconsistent. This is the oddest, and most boring comic on the stands. You’d think DC would try to make it one of the more exciting comics they publish. I mean,  there is a movie out right now, and it could be a good segue for people to buy the comic.

But nope. Instead, we are lost in complete and utter confusion.