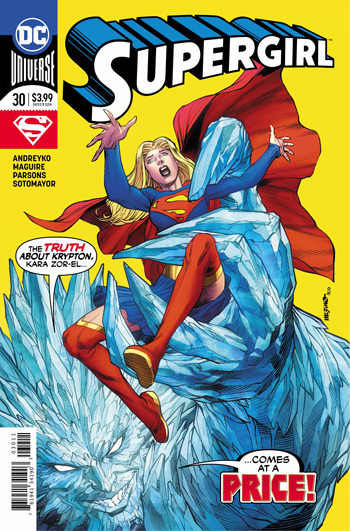 This title has had it’s share of ups and downs lately. The current run by Marc Andreyko started off great and then got a tad boring.

Now here we are, and I’m almost lost as to why we are in space in the first place. I also am having a hard time determining where Andreyko is trying to take us.

But there are some good things in the issue.

First and foremost, Kevin Maguire is back on the art. That automatically made me forgive a lot of the shortcomings with the story. We start off with Supergirl fighting with Z’ndr. Their trust is broken in Kara’s eyes and the argument gets more and more heated. It eventually leads right into a nicely staged physical fight.

The fight lasts for a big part of the issue. Kevin Maguire knocks it out of the park here and shows what he is capable of. Eventually the fight gets incredibly wild and Supergirl takes out Rogol Zara’s axe. She wields it ferociously.

And then comes the really stunning moment which stops her dead in her tracks.

She almost accidentally kills Krypto with that axe. And that stops her cold. It then becomes a beautifully emotional scene where Kara thanks Krypto for saving her life. Maguire really nails the facial expression and body language here and this scene alone is one of the most emotionally powerful scenes I’ve read in a comic lately.

The fight continues and keeps on going and it’s very visceral. Again, having Maguire on the book helps immensely. He really brings his A game and it elevates the book’s quality. It elevates it a whole lot to be a decent book again in almost less than one issue.

The ending has a pair of guest stars that I’ll be interested to see in this book. It could get very interesting. Hopefully the next issue keeps up the quality of this issue. I’m sure it’s possible. You know, as long as it’s Kevin Maguire doing the art on it.