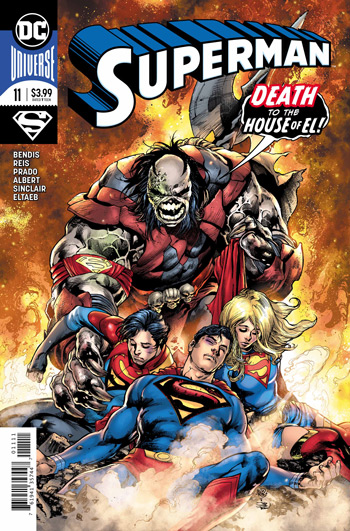 So here we are. The latest issue of Superman. I have to confess I tried to reread the last issue in preparation for this review and I had no idea just what the hell was going on. With that, I just dove headfirst into this issue. I figured, nothing to lose at this point.

We get to see Rogol Zaar and Zod at the beginning of the issue meet up. They don’t get along at first, but then they find a common ground. It looks as though that they are going to team up. This spells trouble to the Man of Steel and his family.

From there, we cut to the present day and there is some big, out of control battle raging on. It’s completely nuts and out of hand and I had no idea what was going on. It was like having too much ice cream of a flavor you didn’t really like.

The whole book seems angled it feels, so that Rogol Zaar and Zod can attack Superman. And they eventually do. It’s super anticlimactic.

There is a twist at the end that feels rather obvious. Ah well. At least the art by Ivan Reis is very good. He’s still amazing. This book as a whole? It needs a major overhaul to make even a lick of sense.