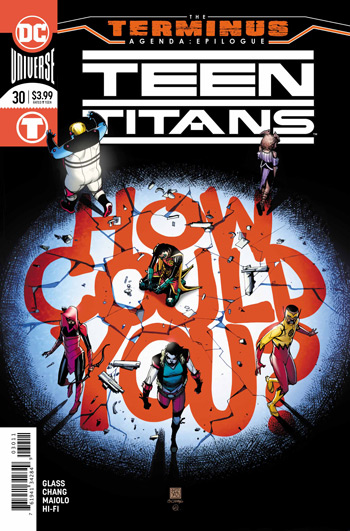 “Hey! Watch where you’re flinging our friends! Wait… Are we all still friends?”

Pretty good one too. No mysteries solved this issue.

Largely that’s because the kids first all have to deal with the fallout from Deathstroke #43, and the events of this month’s Terminus Agenda crossover.

With Deathstroke dead – supposedly – at the hands of Red Arrow, and the secret of Robin’s secret supervillain prison in the basement of Mercy hall revealed, there’s plenty enough to contend with.

It’s also pretty clear however, particularly at the end of our story, that Teen Titans scribe Adam Glass just isn’t ready to go there yet.

Not when there’s so much else for our team to be distracted by.

And so, this month’s issue begins with a little Titans stand-off on the roof of Mercy Hall.

This was all inevitable from the beginning of course. No chance that Robin’s hidden dungeon was going to stay hidden for long, no matter what he thought. One thing that’s reinforced by the end of this issue is just how easy it is for Damian delude himself once he’s decided how things have to be. As a character failing, it’s not a good tendency for someone in his position. And no one is going to convince me that it isn’t this shy of borderline psychotic.

But at least he still draws a moral line at killing.

It’s a clever twist to have this iteration of a Teen Titan Terminus agenda be Robin’s own deadly fail safe against the escape of his prisoners. Though the virus that would have killed them all were any of them to leave Mercy Hall, is about as brutal a solution as everything else he’s concocted in his dark little mind.

And after all, with a tagline of Terminus to the protocol, there’s little chance really, that it would fail to attract Deathstroke’s attention. And the likely consequences of that.

Still, at least Damian never intended to kill any of the prisoners.

Emiko on the other hand…

Emiko seems perfectly willing to administer her own brand of justice. And her fixation on taking down the mysterious Other has her willing to defend Robin’s prison with the fervor of woman bent on the most brutal of revenge fantasies.

Thankfully our other Titans show significantly greater ethical judgment – or at least they appear to. Djinn in particular is about as unhappy with the concept of enforced imprisonment as we might have expected. And Kid Flash, for all that he’s still not that quick to catch up, isn’t far behind.

For Roundhouse and Crush it appears that things are more personal. And with their power sets, it’s only a matter of time before that spills over into a full-on teenage titanic brawl.

It’s all a jumble of over-the-top posturing, egos, tempers, and moralizing, finally come to a head, and just in time too, to keep Robin distracted from the fact that the prisoners were all released from their shackles last issue, by somebody on his own team…

And just in case that isn’t enough to do it, our final page gives us one big daddy of a distraction, one that’s sure to keep our team occupied… for at least a little while longer.

After all, what better way to keep focus off of one mystery, than by bringing up another?

With his talent for tense dialogue and devious plotting, author Adam Glass once again shows that he has what it takes to command our attention. Bernard Chang’s pencils and inking has the style to back it up. Add Marcelo Maiolo and HiFi (man that kid’s busy) to the mix on colors, and this continues to be one excellent book.

One with lots of surprises still in store. I mean really, if you thought this book was ever going to be predictable, I’d say you can probably go ahead and lay those fears to rest.

Next Issue: More father issues? Does anyone on this team not have serious family issues?