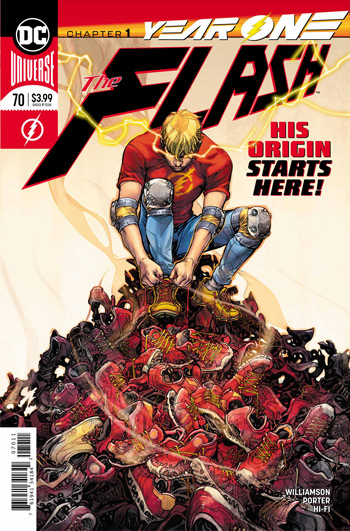 Once I saw the title, I was immediately hooked. The title is “The Flash: Year One.” I was so excited to crack this book open. Even better, it had artwork by Howard Porter, one of my favorite Flash artists ever. As soon as I started reading, I really couldn’t believe this was happening. It exceeded even my wildest expectations.

The first chapter in this book is called “He Will Be The Fastest Man Alive” and it features one of the most glorious Flash images of all time. Howard Porter really just knocks it out of the park with this one and I want a poster of it immediately.

We then see Barry Allen as a young boy. He is in the attic of his childhood home and his mother is calling for him.

We hear about how Barry was standing up to bullies who were harassing another child. It shows Barry’s heroism, even at a young age.

We then get to see Barry working for the Central City Police Department. It’s a cool scene, and we get to see a bit of Barry from before he got his Flash powers. Williamson and Porter do a great job here, and they show us a side of Barry that is often overlooked. They also make us involved with his character and care about him. That way, when the lighting strikes, it really hits the reader hard.

And lightning does strike about halfway through his issue . We get to see Barry’s recovery process and his first time discovering his new powers. It’s joyous. It’s handled so carefully and well, that the creative team really do make this origin tale definitive.

We then get a surprise as the issue ends! Barry does a little bit of time traveling and it threw me off. But I liked being thrown off. It’s a strong ending and the possibilities that exist because of that ending are truly limitless.

The story is strong. And Porter really does the best work of his career on this issue. This is the start of something truly awesome indeed. I can’t wait to see how this creative team handles it from here on out.