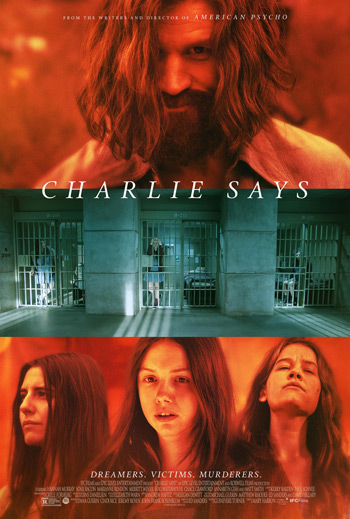 When I was a child, like most children I partook in the pastime game “Simon Says” where one person list off commands for other people to following but only if Simon declares. It’s funny to look back at how such an innocent game of follow the leader could take a sinister turn and in the hands of the wicked could be deadly.

Mary Harron’s Charlie Says, places the women of the infamous Charles Manson cult in the spotlight as they explore the psychological hold the Manson Family members Leslie Van Houten, Patricia Krenwinkel and Susan Atkins had on them which led to a series of horrific murders.

Now imprisoned for their crimes, the trio spends their days wondering how it all went so wrong while working through the trauma of walking away from the stronghold Manson (played by Matt Smith) still has on them.

Following their journey of forgiveness of themselves and hopefully for the families of their victims, they are assisted by casework Karlene Faith (Merritt Wever) through a series of redundant flashbacks. As Faith struggles to convince the women the severity of their brainwashing, the plot shifts to Van Houten (Hannah Murray) who remembers Manson as a free-loving LSD spirit who treated her like a goddess. Posing the question, what is there to forgive?

Unfortunately for the audience, screenwriter Guinevere Turner, never takes risks to show just how the women (and many other Manson followers) succumbed to Manson’s charm or how the teenagers lives were endangered if they didn’t disobeyed Manson’s orders. The script is painfully one-side with the purpose of making the audience feel sympathetic for the women, however the lack of showing the vicious and very cunning dark-side to Manson results in a boring lifeless movie that denies the women to truly struggle with their crimes.

The most painful aspect of Charlie Says is the waste of Smith’s ability to give an outstanding performance as Manson. The brainwashing (which is never shown) is portrayed through a series of ramblings that could have easily been the side effect of the daily LSD intake. The “Messiah” that Manson is known as, is reduced to a hippie living in a commune with questionable hygiene issues struggling to obtain a well-balanced meal.

Charlie Says had the potential to be an incredibly smart, gritty and honest look into life after the Manson murders, the psychological struggles of murder and the path of redemption instead everything felt forced, formulaic and uneven; asking its audience to forgive these women of crimes they don’t feel remorseful committing.

Feeling more like an after-school special, Charlie Says is full of too many problems to find any redeeming qualities and as a result it does a disservice to Manson’s victims and its audience watching.