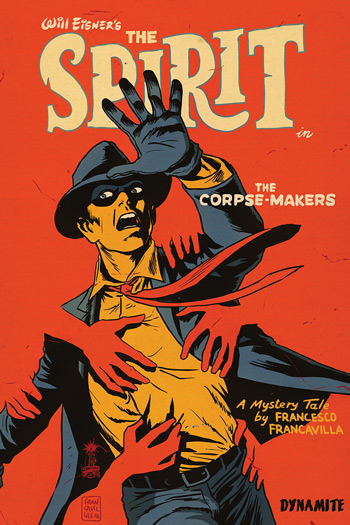 For years, Will Eisner wouldn’t allow anyone to do any new Spirit stories. Eisner was never one to live in the past and to him The Spirit died in the mid-50s.

When he did finally relent, though, the floodgates opened to a whole bunch of extremely talented folks who—for the most part—really didn’t seem to “get” The Spirit!

For one thing the character worked best in short form adventures, not full issues or multi-part episodes. For another, The Spirit at its best was rarely about The Spirit himself. He was a cipher, barely even present much of the time as stories developed in his world that were both light-hearted or deeply philosophical.

And he wasn’t Denny Colt.

Oh, no. Denny Colt wasn’t The Spirit at all.

Denny Colt died in that first episode way back in 1940. The Spirit had no secret identity, no alter ego. He was simply The Spirit.

And then there was Ebony. Eisner’s biggest mistake was to draw Ebony as a most unfortunate—but entirely acceptable at the time!—racist caricature and yet write him as the very heart of the long-running strip. He was a great character who worked as both comic relief and legitimate sidekick but who became more and more problematic as times changed. Attempts at replacing him with similar characters never really worked. It really was Ebony who was a major part of The Spirit strip!

And as I said, a lot of creative folks who have tried to deliver a new spin on the Spirit and his adventures have failed with a whimper or, in the case of the big-screen movie—a massive implosion!

One that gets it a lot righter than most is Francesco Francavilla.

The Corpse-Makers isn’t Will Eisner’s Spirit. It’s way too long, too serious, based largely around The Spirit himself, and deals with the Ebony issue by simply making him as bland and generic as possible.

That said, what he gets right is that he cinematically tells an entertaining mystery set in a Central City recognizable as Eisner’s dark, smelly, and perpetually rainy noir world. The renowned writer/artist trots out many of Eisner’s tropes such as the unique logo placements, The Spirit tied up, and even a flashback to an old Spirit Foe.

Where he triumphs most, however, is when he delivers all of this in what has become in recent years his own familiar style of storytelling. Simple and at times sketchy art, with lots of ultra-close close-ups, deep shadows everywhere, and, once again, a judicious use of color as part of the overall package, rather than just a necessary step in the printing process.

Will Eisner’s The Spirit represents a definite peak of story and art in comics history but as Will himself noted, it ended way back in the 1950s. The feature’s many collections over the years insure that even with its attendant controversies, The Spirit will never be forgotten.

But just as the late Sir Arthur Conan Doyle will never be able to write another Sherlock Holmes story, Will Eisner—himself now a spirit—will never again draw his hero. I have to think, though, that if new Spirit stories are now inevitable, Will would more admire a writer/artist like Francavilla who learned from the techniques Eisner pioneered rather than simply attempted to copy them.