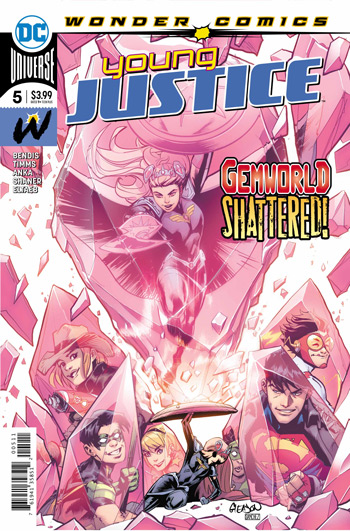 “You ever meet Batman? You drive just like him!”

This month’s issue didn’t land with me as well as Brian Bendis’ previous work on the title has so far.

Maybe that’s because of the art. Which was fine. But with John Timms doing a decent stand-in gig for Patrick Gleason (I hope it’s a stand-in), and Kris Anka on point for what has now become a regular tag-team approach to our flashback YJ team-member backstories – not to mention a wholly gratuitous showcase splash page from Doc Shaner (which yes, was fine) – well it’s all starting to get a bit much.

I get it – everyone wants in. But wrangle Patrick Gleason down if you have to. This book deserves continuity in its launch.

Maybe it’s because there’s just quite a lot less from Gemworld this month than I was expecting after last issue. The reason for this, is that instead we get quite a bit more about Tim Drake.

Which, as it happens, is something we really need. Maybe more than we realized.

I guess I just didn’t want it right now.

The whole flashback YJ team-member backstory thing is effective, but with Wonder Girl, Superboy and Amethyst already under our belts, I want more of a break to outright action before going back into the same pattern – especially if this continues and the next several issues feature more of Teen Lantern, Jinny Hex and Impulse.

I’m guessing though that’s exactly what will happen. So as long as you’re prepared, by all means enjoy what you can. It’s still good fun.

The action we do get this month is pretty decent actually. Our first team face-off against Lord Opal is a good demonstration of why it’s not a good idea to underestimate a bunch of kids with the combined powers of, and maybe a little more chutzpah than, the Justice League.

But it also underscores the fact that Opal has some important mysteries working in his favor. And a fairly disruptive power set.

One gets the impression our team is exactly where they need to be, at maybe exactly the right time.

The question remains, with (maybe?) three more issues in our Seven Crisis lead-in storyline, whether Bendis is going to build this up to a true crisis-level climax, or if the threat of Lord Opal is simply going to fall by the wayside as a device that explains the team’s formation.

Because both pay-offs would be fine with me.

In the meantime, I still want another action romp issue, like we got right out of the gates with issue #1.

That gets undercut this month with a little young (justice) romance sequence, featuring Tim Drake and… Stephanie Brown. Aka Batgirl, once-upon-a-time ago. And aka Spoiler, at another point of once and time.

A fact that Tim Drake now actually happens to know all about, because of… Zatanna?

Read the issue if you want the details. But it would appear that Master Drake has been having some cross-crisis static in his identity and self-awareness, which leads to a quick trip to the Hall of Justice, and from there a realignment with a certain alternative history in which he remembers his friendships with…

Which helps explain some of the confusion that this book started out on. And definitely explains Tim’s visit to Metropolis.

So maybe Tim Drake’s backstory really is important for us right now, in more ways that we realize.

But it also highlights the fact that Something Is Going On Here.

Anyway, things are finally coming to a head. May take a few more issues to get on through that though. Hopefully that won’t screw with the momentum.

Though I admit, I sure am interested in little miss Green Lantern battery girl.

And whatever it is Jinny Hex has got under that tarp.

And whatever it is that Bart’s irrepressible uncontainability has gotten these kids into now.