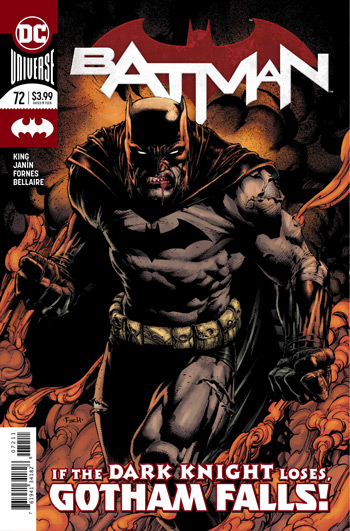 I can’t believe the places that writer Tom King has taken us thus far in his run. It’s just getting darker and darker.

This issue is another chapter that had me on the edge of my seat throughout. I couldn’t believe what I was reading.

It opens on a  beautiful page drawn by Jorge Fornes (who I have absolutely come to love on this title). It shows Batman jumping down to fight Bane. And it’s pretty damn insane. Bane has been beating down Batman pretty hard and it seems he has finally broken him.

Fortunately the whole issue is comprised of Batman fighting Bane drawn by Fornes. And it’s brutal to read.

Wayne Manor is also torn apart as these two fight each other.

At the end, Batman is beaten down in an all too familiar way that wasn’t my favorite, but I guess had to be done. I love Tom King’s run, but man is he obsessed with breaking backs.

There are some flashback scenes drawn as well by Mikel Janin that are interspersed throughout that issue. These are nice and they catch the reader up and show how everything is related in King’s story up until now. It’s also narrated by someone unexpected which was pretty cool.

It has to be said that I’m really hoping King didn’t weave an incredible story these last 72 issues just to get us to a watered down version of Knightfall. There are a lot of nods to it and quite honestly, that’s when the series is at its weakest. King can tell an original story well. I hope he continues to do that rather than redo an already used up story. Sure, it was great at the time. But his run has turned into its own thing and I hope it stays there.