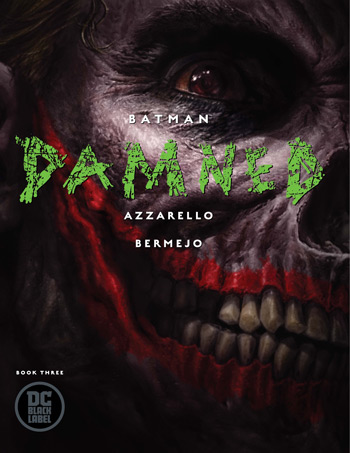 Brian Azzarello has certainly penned an unpredictable battle for The Dark Knight’s soul.

Darkness is the name of the game, and Batman is up to his eyeballs in it.

This series conclusion is muted compared to Bat Wang and Harley Quinn’s explicitly suggestive scene in the previous outings.

Batman wakes up buried alive, and the narrative doesn’t provide a clue to how it happened. It’s hard to recall the last time a terrified Batman was seen on the printed page.

The convoluted dialog fails at its cryptic and ominous objective, talking about control and fear as something people never really have. Dark philosophy and flashbacks to that fateful night in Crime Alley occupies so much real-estate, there is little time spent the main plot.

Did Batman kill The Joker?

We get the answer, and it falls flat. Whether it’s DC proper Batman or Azzarello’s version of the character, it comes off as a cheap trick rather than a big reveal.

Lee Bermejo’s artwork is the definition of exquisite.

All the illustrations on display capture the cesspool of supernatural gloom the narrative attempts to convey. Gotham City coming off as Batman’s personal hell is the only time the narrative and illustrations effectively work in tandem.  While there are comic books where the art surpasses the story, here, they are separated by such a wide margin; it’s almost difficult to enjoy Bermejo’s visual gifts…almost.

The final chapter of Batman Damned, much like the series, is a victim of its creation.

Establishing Black Label’s format for prestige mature content took precedence over telling a compelling story. Swamp Thing and Constantine’s reunion was a nice touch and Batman facing off against his worst nightmare was a good idea that was bogged down by faulty execution and poor pacing.