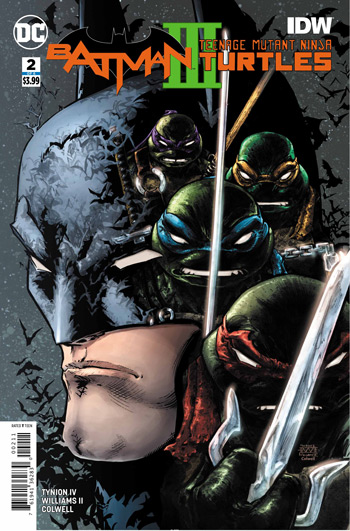 TMNT means a lot of things to a lot of people and literally generations of fans with their favorite toys, cartoon or over the top movies (pick any)!

And Batman in his 80th year has so many versions that his current main title book helmed by Tom King reads more like a continuing issue of Planetary/Batman than anything else.

That is to say there are more versions of Batman than multiverses containing them!

Perhaps the most absurd (it’s at least in the Top Ten) is this title’s Bruce Wayne, who’s origin is tied into being raised by Splinter with our favorite pizza-loving Teenage Mutant Ninja Turtles.

By manipulating multiverses, and two Prime Earths that are vibrating near each other, our Prime Batman and The Eastman and Laird black and white O.G. Turtles are now against Krang in a battle for the timelines to align.

Long story short, Eastman draws our sometimes square-mouthed Turtles with black and white and gray wash undertones, mixed with color pages and panels with our modern Batman and Turtle Batman and the boys.

The only critique I have of this art style or clever conceit to the book is that it makes it more Pleasantville than Who Framed Roger Rabbit.

I love the concept and art direction for really having and committing to the Original Turtles to be drawn like their original comics. Totally get it. Though, I confess that I personally prefer the new Star Trek: The Original Series remastered space backgrounds and CGI planets. It’s merely an aesthetic choice for me, as I’d be curious if the desired effect would be achieved by fully coloring those Original Turtles.

There is a B-Story with Krang appearing as a hologram to Joker/Shredder timey-wimey hybrid as Batmen and Turtlekind come up with a game plan.

Buy this issue, even if you don’t plan on checking out the rest in the series it is good to see what Tynion IV gave Eastman to draw here, plenty of action and old school backgrounds mixed with Williams II usual dynamism.