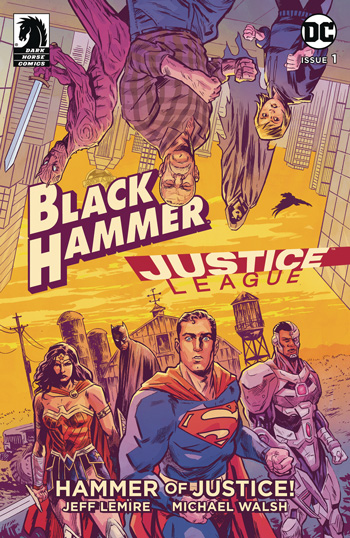 I was so excited when I heard that this was coming out. Black Hammer is one of the most consistently entertaining comic books on the stands. The idea of that cast of characters teaming up with the Justice League sounded like it would be great.

And the good news is that it’s written by Black Hammer creator Jeff Lemire. What more can a comic reader ask for?

The issue starts off at the farm that the main characters from Black Hammer were trapped at.

Abraham comes out for a walk. He sees that his tractor has disappeared. Abraham goes over and sees that Talky-Walky has used the tractor to build some kind of device to finally get them off of that farm!

The gang gathers together. Then, so something happens. A mysterious stranger shows up. The gang go over to great him.

And that’s when the stranger outright says that he wants to buy the farm. Just what is going on here?

Lemire then has the story cut over to the DC Universe where the Justice League is fighting Starro. This is a completely awesome scene drawn up by Michael Walsh. It’s a great introduction to the Justice League for this story, and Walsh visually knocks the scene right out of the park. And once this scene is over, things really start to get going at a fast clip!

The Justice League is now placed at the farm where the Black Hammer gang was trapped. And we get to see the beginning replayed but this time with Clark Kent in the “Abraham” role. It only gets crazier from there.
Lemire writes one hell of a first issue. You can’t peel your eyes away from it. It’s fast paced and fun with a lot of surprises. The art by Michael Walsh is just incredible as well. This is a great first issue of a series I can’t wait to continue reading. This is just tops.