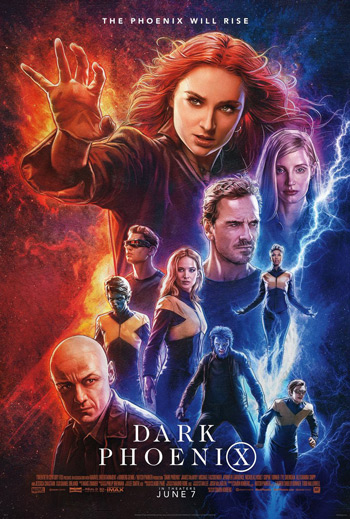 We’re not quite out of the X-Woods yet, as the twelfth X-Men movie hits theaters this week.

Dark Phoenix stars Sophie Turner as Jean Grey in a movie based on (but not exactly) the Dark Phoenix Saga we know from the comics.

X-Men: Days of Future Past eliminated the X-Men 3 reworking of the Claremont/Byrne run, leaving this somehow first-time director and screenwriter Simon Kinberg a blank slate to revisit one of the most revered comics stories in history.

Dark Phoenix serves as a nice cap to the franchise, though we are still expected to get a New Mutants horror movie in 2020 from Disney after the Fox acquisition. For finality’s sake, this review will contain spoilers so please proceed with caution!

2019 rings the death knell for lots of pop culture, tv and comic movie franchises, and I’m growing more and more OK with this idea.

Dark Phoenix wasn’t terrible, it wasn’t great, it may be the most Okayest of all the X-Men movies.

Days of Future Past was a masterpiece, full stop. X-Men: First Class was the reboot it needed and my opinions on X-Men: Apocalypse are as follows: it was terrible.

This particular reviewer falls into the trap of giving everything a chance and giving positive reviews to somewhat reviled movies, but didn’t fall into that trap with Apocalypse. While at a screening in LA, miles from home on a lonely work trip, I took a gamble on heading to see X-Men: Apocalypse. I damn near left the theatre but I had nothing else to do but go back to the hotel and watch Pawn Stars. Why are you hearing about this now? Because I didn’t let it out then and it has been bothering me ever since that they rushed out Apocalypse after Days of Future Past to cash in on the previous movie’s success and Hollywood failed us all.

There I was in Los Angeles, hating my life and being spoon-fed comic book drivel by that town. The charm of Days was immediately counteracted by a hollow cash grab with Oscar Isaacs as the wrong sized villain and really confusing or just misconceived Magneto sub plots.

Dark Phoenix definitely had to win me over, as an addict chases the dragon for more X-Men 2, Logan, Deadpool and Days of Future Past highs. Dark Phoenix comes along at the right time, an Endgame for the Fox properties as it were. I can barely take any more, and New Mutants seems troubled in production, so who knows what to expect there. Let’s attempt to wrap it up, shall we?

Thankfully, my night with Dark Phoenix was better than my night with the previous film, but my expectations were not quite as high. An absolute stellar performance by Sophie Turner as Jean is what sold it for me and the Morrison era X-costumes only sweetened the deal.

Much like the comic, the X-Jet takes the team to space and the infamous solar flare/Phoenix Force finds Jean among a mission to save astronauts from the Space Shuttle. She returns to Earth more powerful than ever. They celebrate their mission victory in the woods with a confusing and disjointed Dazzler cameo that doesn’t do anything but pump a well produced pop song over the theater’s Dolby. This actor is lip-syncing a song with something like 48 harmonized vocal tracks on it. It’s either an effective illustration of Dazzler’s power or a hack fan service moment. I don’t think it’s both of those things. Dazzler does not appear to be doing anything else in the film, so don’t really know the point of that.

There’s X-Men upon X-Men and gifted youngsters lousy in the mansion with the school in full swing. There even may be a young man that looks like Quentin Quire running around! Kodi Smit-McPhee plays Nightcrawler, one of my favorite X-Men, but I forgot he was even in the last movie. Many times I found myself asking if we had seen a character before or not, realizing too late that it likely doesn’t matter.

The main team of Storm, Raven (never Mystique!), the charming Quicksilver and Beast are great, just as great as they have been for at least two movies, and Tye Sheridan is great too but somehow also made out to be another face punchable on-screen Scott Summers. Is his visor on upside down? At least they got the blasts right this time! I had to look it up, but his brother Havok was killed in Apocalypse in case you were wondering.

The fight scenes and action, complete with some great (and some not so great) CGI for Jean’s powers make for a fun HD experience in the theater. In the third act, just as I was about to get antsy, there is an extended train fight, daresay, ‘train battle’ that of course perked me right up! Lots of metal for Magneto to play with in a train fight!

The good guy/bad guy allegiances switcheroo is also a common X-Men movie trope, with Charles and Erik always having time for a chess match, Beast turning on Charles for what he did to young Jean and teaming up with Magneto comes at no surprise. Charles demanding to Magneto that he “can’t let him do that” is a return to the familiar. In fact there’s a lot of callbacks to both the younger and older versions of the characters and I found that mostly charming. They need to get it all out of their system, time is running out on this franchise!

Speaking of time running out, and major spoiler here! When Raven is impaled like oh-so-many Dracula, you can practically hear the gasp of her contractual obligation being met! How sweet it is, J-Law! One of her best lines (you’ll see it, I don’t want to spoil the joke) about the X-Men is such a sweet burn Charles will need Storm to make him some ice cubes to cool down. This turning water into ice actually happens in the movie, don’t be sad, as I gave you a spoiler warning!

What else to say? Jessica Chastain plays an alien shapeshifter looking for the Phoenix Force and…get this…take over the world! She is the big bad seeking to manipulate Jean into giving her the force and turning her on the X-Men. Jean pulls a particularly cruel stunt with Charles and his wheelchair that is disturbing to watch.

One sidebar, in the lead up to the final battle, Nicholas Hoult transforms into Beast and leads the charge into the New York apartment. The bizarre part is that he almost gets hit by a car on his way there! Look left, right and left again, Beast!

But I digress. There is a lot to say about nearly 20 years of X-Men movies in this review of one of the last. I was genuinely excited to see Magneto return to the fight and reveal his helmet (I thought for sure this was another contractual obligation and we weren’t going to see the thing) and to see Charles fall from grace in the eyes of his students for overreaching and basking in the glory of the public’s adoration.

Kinsberg has been around the X-Men movie and TV properties since 2006’s X-Men: The Last Stand, a hated movie with problems but it got some things right or close to it. Dark Phoenix isn’t a complete redemption for the pitfalls of X-3 or Apocalypse but it is a fun one and worth your entertainment dollar.

First Class and Days of Future Past remain at the top of the stack for the McAvoy/Fassbender timeline but thankfully Dark Phoenix can sit comfortably among these movies as a peer. It is surprising to see this producer take the directorial reigns after such a long time but as someone who has developed Legion, The Gifted and worked so closely with recently cancelled Singer on his movies, it’s great to see.

There is a consistency, though not as thoughtful as Feige’s MCU, to the X-Men movies, an originator in the genre, that makes the great ones stand out, the good ones hang out and the bad ones forgivable enough to give the sequel films one last try.