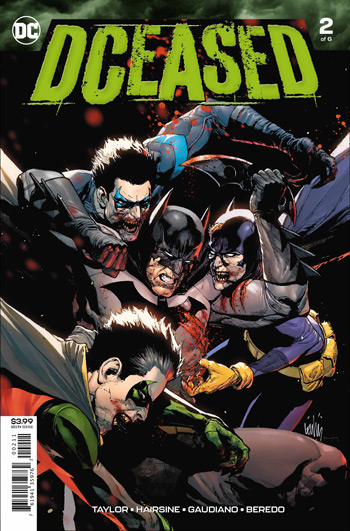 The first issue of this book was an unexpected surprise. I didn’t even hear about it until it came out.

The first issue was really cool and terrifying. I was very happy reading it. Tom Taylor is a writer who doesn’t get as much recognition as he deserves. He writes some really amazing stories and this is another one which I absolutely am enjoying .

The opening sequence of this book is one that is absolutely horrifying.

Aquaman is boarding a seemingly abandoned ship. He goes exploring and what does he find? He finds an entire ship filled with flesh eating zombies! This is a thrilling beginning to the comic and I was instantly hooked again!

We then see that some of the heroes have been infected by the zombie plague. We see that Superboy is comforting Robin that everything is going to be okay. We get to see a scene of Harley Quinn and Poison Ivy talking and planning.

Ivy is going to use her powers to figure out what is going on. But it’s so tense, even a scene like that made me closely pay attention.  It’s so intriguing to read and I could not pull my eyes away from this book.

Harley then goes to talk to the Joker. But it’s looking like he might be infected! The imagery by Trevor Hairsine are especially great in these moments. He really knows how to make the art pop off the page with the right amount of brutality.

Things get even crazier. The wildest scene is when Hal Jordan gets infected and fights Green Arrow. It’s unbelievable. Tom Taylor writes in these ingenious scenarios that we would never think to see. He also keeps the book going at a lightning pace and it never lags once.

The ending of the book is especially gruesome. We get to see Batman’s last moments. He is infected and he must be dealt with. We get an ending here too that is actually shocking as a result. I’m at the edge of my seat here. I can’t wait to see what happens next. This is a great book with a superb creative team. I’m very excited to see where this goes.