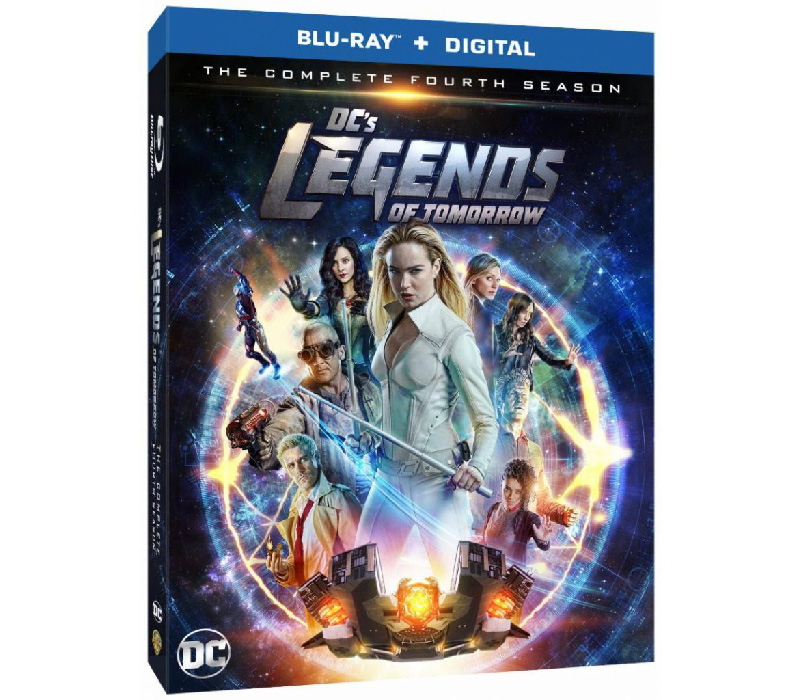 The world’s most epic race against time continues as Warner Bros. Home Entertainment releases DC’s Legends of Tomorrow: The Complete Fourth Season on Blu-ray and DVD on September 24, 2019. Fans can get up to speed with all 16 captivating episodes from the fourth season, plus those that purchase a Blu-ray copy can enjoy timeless special features including an epic storytelling featurette, deleted scenes and a gag-reel. DC’s Legends of Tomorrow is The CW’s #3 show among Total Viewers, with over 1.8 million viewers tuning in weekly. ⃰ DC’s Legends of Tomorrow: The Complete Fourth Season is priced to own at $24.98 SRP for the DVD ($30.99 in Canada) and $29.98 SRP for the Blu-ray ($39.99 in Canada), which includes a Digital Copy (Available in the U.S.). DC’s Legends of Tomorrow: The Complete Fourth Season is also available to own on Digital via purchase from digital retailers.
*Source: Nielsen National TV View, 2018-19 broadcast season to date (09/24/2018 – 03/17/2019), Live + 7 Day ratings; excluding repeats, specials, movies, sports, less than 3 telecasts
After defeating the demon Mallus by cuddling him to death last season, DC’s Legends of Tomorrow join John Constantine and Ava Sharpe’s Time Bureau to save their world – and their legacy – from magical creatures from myths, fairytales and legends who have escaped and infected history. As the Legends time-travel across historical events and encounter famous figures, they now have to contend with an added shot of magical craziness!
“Over the past four seasons, DC’s Legends of Tomorrow has captivated audiences through its incredible action and impressive special effects,” said Rosemary Markson, WBHE Senior Vice President, Television Marketing. “We’re excited to release the Blu-ray – the only format with in-depth bonus content in addition to the 16 action-packed episodes from season four for the DC Fanboys and loyal series fanbase.”
With Blu-ray’s unsurpassed picture and sound, DC’s Legends of Tomorrow: The Complete Fourth Season Blu-ray release will include 1080p Full HD Video with DTS-HD Master Audio for English 5.1. The 3-disc Blu-ray will feature a high-definition Blu-ray and a Digital Copy of all 16 episodes from season four (Available in the U.S.).
DC’s Legends of Tomorrow stars Brandon Routh (Arrow, Superman Returns), Caity Lotz (Arrow, Mad Men), Maisie Richardson-Sellers (The Originals), Tala Ashe (The Flash, The Carrie Diaries), Jes Macallan (Mistresses, Shameless), Courtney Ford (Dexter, Supernatural, True Blood), and Ramona Young (Blockers Santa Clarita Diet), with Nick Zano (The Final Destination) and Dominic Purcell (Prison Break, The Flash), with a special appearance by Matt Ryan (Constantine) reprising his popular role as John Constantine. Based on the DC characters, DC’s Legends of Tomorrow is produced by Berlanti Productions in association with Warner Bros. Television, with executive producers Greg Berlanti (Arrow, The Flash, Supergirl, Blindspot, Black Lightning, Riverdale), Phil Klemmer (Chuck, Political Animals), Keto Shimizu (Arrow), Grainne Godfree (The Flash, Arrow) and Sarah Schechter (Arrow, The Flash, Blindspot, Supergirl, Black Lightning, Riverdale).
BLU-RAY EXTRA CONTENT