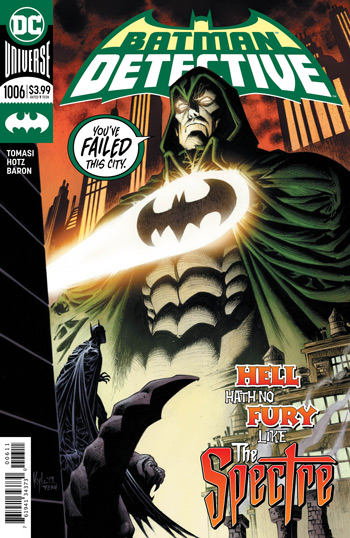 Since Peter J. Tomasi took over writing this title, this has been a great read. He has been doing an unbelievable job making this a solid book month in and month out.

This is the first story since the Arkham Knight arc came to a close. So how does this issue fare?

The beginning of this issue focuses on cop Jim Corrigan and his partner. They are eating a meal and then they are called to a crime scene. This leads to the the Spectre being introduced into the storyline. And it’s pretty awesome to be honest.

I remember Hotz from years ago and I never really cared for his work back then. Although he’s done a lot since, I never followed him.  Here though, he is a much different artist. And I have to say that I am more than impressed. It’s great. It makes me want to track down some of his other work immediately.

We then cut to Batman fighting some thugs. It’s an exciting scene that the creative team handles very well. The Spectre is in need of Batman’s help. Batman admits that he never thought that he would run into the Spectre again.

After a brief talk, the two of them begin their work.

This leads into a hell of an investigation. Who committed the crimes in this issue? Why is there a cult seemingly dedicated to the Spectre’s name? Just what is going on here?

Tomasi and Hotz handle the whole thing with pizzazz. It’s great and feels like a classic comic book story. I love what Tomasi has accomplished on this book thus far. He’s doing great and he and his collaborators have been top notch. This is another fine issue indeed.