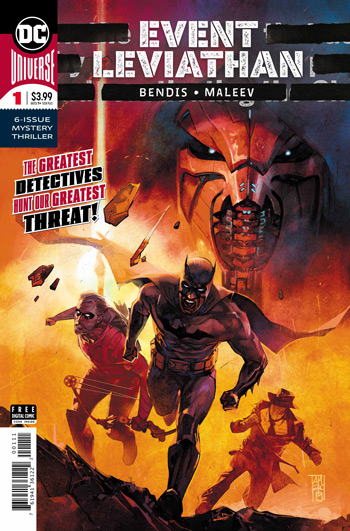 Inside the pages of Action Comics, Leviathan has made an indelible impact on the DC Universe.

Wiping out all the world’s intelligence organizations such as A.R.G.U.S. is an impressive feat.

Doing it in one day and at the same time, however, it is quite scary.

Leviathan could be anywhere, and anyone, which has everyone is on edge.

No one trusts anyone.

Even Batman and Lois Lane have some trepidation around each other. They converse as if they’re strangers thrust together by an unfortunate coincidence. Brian Michael Bendis’ script leaves absolutely nothing to chance.

One page outlines the important story points that led up to this event. A dazed and confused Steve Trevor is discovered and gives the reader a look at Leviathan’s destruction from an inside perspective.

The writing and illustrations work well in tandem to exhibit tension throughout the book. Alex Maleev’s eerie noir motif augments the whodunit theme with dark shades of blue. Character work and reactions match the ominous tone of the narrative. One jump scare moment of Steve Trevor shooting at Lois Lane came at the perfect time after disclosures and sinister theories came to light.

At times, the story felt like it’s not going anywhere.

Probably because it takes place in one area. As a first installment should, Bendis spends most of the time setting up the overarching narrative. There has been a lot of focus on DC’s clandestine operations, and the book’s interest in a new character from that realm left a lot to be desired. Sure, the reader will wonder how they will figure into all this, but we didn’t get enough information to about the person in question to care about them.

Batman comes up with a crafty idea to solve the mystery while another like-minded hero looks on from the shadows.

Superman is not in this book. At first, I thought it was a mistake not to have the Man of Steel in his issue. After thinking about it, I’m glad he was absent. Leviathan is meant to be a threat to the entire world but was starting to come off as just another Superman villain. Seeing other heroes investigating the situation and take action encapsulates the danger Bendis’ new big bad is meant to exude.

The always creative duo of Bendis and Maleev produce an intriguing enough mystery thriller in this opening salvo. I say intriguing enough because it felt as if they held back a little bit. The execution of some key moments was excellent, while others were ok. Maleev’s artwork set the perfect tone. I hope his work will get to shine even more in upcoming issues. Bendis’ writing can sometimes be verbose for a visual medium. However, he struck the right balance this time around.

Overall, Event Leviathan is off to a good start. Hopefully, we get a little more meat in the next installment with that pattern increasing in each outing.