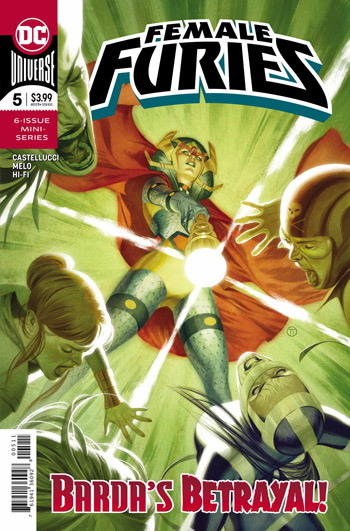 This book has been a solid read throughout. I’m sad it’s only going to be six issues.

Writer Cecil Castellucci is so damn good that she creates fantastic stories with a political punch. She has also taken forgettable characters and made them modern and vital.

Big Barda has raced to the Earth to get to Scott Free. She’s fallen in love with this guy (we all know the story but this is some in a unique way).

This has caused all out war between Apokolips and New Genesis. She’s running to save Scott from being caught up in Darkseid’s plans.

The problem is, Darkseid sent the Furies to capture Scott, so he doesn’t defect over to New Genesis and tip the scales.

Castellucci writes this issue with a wry sense of humor. The Furies arrive on Earth and have an immediate disdain for it as it’s too green and people are frolicking. But they are immediately focused on their mission on stopping Barda. Even if there is too much smiling going on (which makes them extremely uncomfortable).

Barda immediately locates Scott. She tells him what is going on. They kiss and decide that it is time to run. The Furies however, catch up to them quickly. A huge fight ensues. It is very exciting. And it’s also very pointed.

During the fight, Barda tries to tell her sisters why they shouldn’t listen to Darkseid anymore. The sisters actually listen to reason. Barda and Scott come up with a scheme where Barda and Scott can be free afterwards. And it leads to a surprising ending that I wasn’t expecting.

Castellucci and Melo are a dream team. They make every moment count. They also create a feminist view of the world that is smart and creative and just plain excellent. It’s been a solid run. They just need one more great final issue next month to make this a classic.