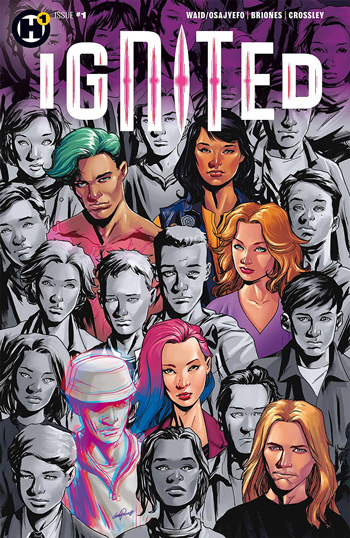 This is the book that has been touted as the beginning of a shared universe in the Humanoids H1 imprint. It has an impressive pedigree of talent in this book from Mark Waid to co-writer Kwanza Osajyefo to artist Phil Briones. I was looking forward to reading this book as it sounded pretty damn great.

Sadly, for me, it fell a little short of the premise. That being said, there is still a lot to like in this comic.

As the book opens, we are introduced to the teachers and students of Phoenix Academy High. It’s the first day of a new school year and people are coming into the school. But the remnants of an event that happened last year hang high over the feelings of the crowd.

It was something that nobody ever expected: A mass school shooting.

The narrative shows the people in the school try to get back to their lives after the incident. But how do they deal? How do they go on? This part feels pretty real and close to home.

We meet our hero of the story, Anouk, here, and watch her try to readjust to school after the terrible incident. It’s admittedly pretty powerful stuff to read and very compelling.

The writers have decided to make the story relate to the real world and real life school shootings. It’s an admirable attempt that doesn’t quite work for me dramatically. I will say, that there are some amazing moments, like when we see in a flashback what Anouk went through with the shooting. The visuals hit hard in that part especially. Anouk is also a pretty well developed character.

Near the end, we get to see Anouk get “Ignited.” This means she is granted superhuman powers. It’s also when the book switches into “comic book mode.” And the switch in tone was jarring for me.

The art by Briones is actually the best part. It’s fluid and moves the story at a great pace. He also nails the tone of the book perfectly, even when the story falls short. It’s a hell of a feat and Briones should be commended for it.

This is a book with a hard topic. I applaud the creators for trying something different. It’s a tough book to build your entire shared universe on. If they can get the tone of the comics a little more balanced, they might be on to something here. Let’s see what happens.