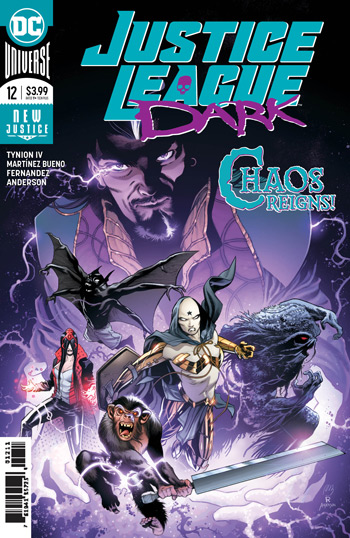 “We are the Justice League of the Dark, and we will protect you.”

James Tynion brings his Lords of Order story arc to a neat conclusion this month, taking the opportunity to address a lot of loose threads and question marks that have been floating around, some since the beginning of this series.

The show’s a ton of fun too, doing to full effect what this book has always done well.

So, it’s a good book, worth the getting. But you know that already, if you’ve been reading the series, because this issue is the necessary wrap up, save the day by the nick of our pants and on the razor’s edge of a knife to boot final issue of Tynion’s latest multi-issue pentad – and Nabu, Lord of Order, is basically ending the existence of all magically-created reality, so, not to be trifled with.

Unless you have a power source of comparable might to draw upon. And a healthy power upgrade to go, on the side as well, if you would.

Last month’s ending on Wonder Woman’s and Zatanna’s new duds was candy enough, but Justice League Dark as the New Lords of Chaos is great fun indeed. Take the chains off of some of these folks and it makes you wonder why, indeed, they have been holding back at all, any one of them.

Ah, but catharsis feels so good.

Bobo is fierce, his sword more savage, and he is royally pissed. Swamp Thing is implacable – and deadly. Man-bat just looks wicked cool. (Seriously, Dr. Kirk Langstrom has got be wondering by now just exactly what kind of trouble he really should be getting into…) And Zatanna… well, Zatanna wants to break things.

Nabu is, unsurprisingly, and righteously, appalled by all of this unfettered power, and all of its terrifying potential. Particularly given that it’s a credible threat to all his plans – and just as things were going so well too.

But he is on the wrong side of history on this one. And the students have outgrown the master.

All of this gives James Tynion ample opportunity to throw in helpful clarifying comments and one-offs about the nature of magic, and order and chaos and imagination and the darkness that this involves and how this all might suggest a different way forward from a DC Universe of Dark Magic, into one more decisively brighter, and heroic.

It’s a good pitch, and it seems Wonder Woman is just the gal to give it. The wrap up of the issue feels in many ways to be a wrap of much of what has come before. It is a turning point, in fact – and at its core it’s a big one.

Just how big they want to play it remains to be seen. But they could play it very big, and certainly it means a fundamental power shift in the worlds of magic. One that puts the Justice League squarely at the forefront.

Given what’s ahead, I hope that Diana’s made sure they have some tricks up their sleeves. Because unless Man-bat or Zatanna find themselves drawn back to the shores of Chaos, that particular source of power seems spent.

And Circe has the Witchmark.

And the Otherkind are waiting.

Next Issue: Where lies the Brighter Path – ?