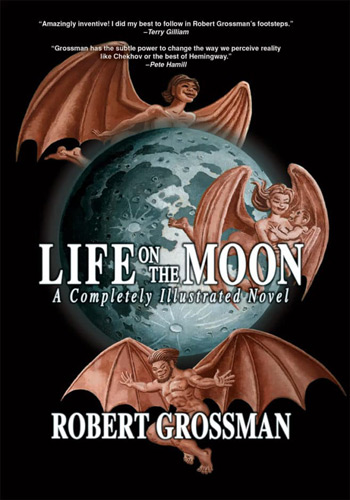 Robert Grossman was truly a renaissance man. A painter, sculptor, artist, filmmaker, cartoonist and author, his work has touched the lives of so many who might not even recognize his name.

In whatever capacity he was hired for, he created something that connected with many but was uniquely his own. Grossman’s work graced the pages (and/or covers) of MAD, Rolling Stone, Sports Illustrated, Newsweek, Esquire, New York Magazine, The New Yorker and even album covers (most notably, The Firesign Theatre).

However, the piece of work that he is best known for is the poster for the movie Airplane! in 1980. Grossman’s iconic illustration of an airplane tied into a knot is one of the most instantly recognizable pieces of artwork of the last 50 years.

It manages to describe the hilariously twisted tone of the film without revealing anything at all. It is a brilliant example of using art to convey a broad idea without using a single word.

Since Grossman was both an artist and writer, he eventually directed his focus to an out of this world tale he called Life on The Moon, which he would both write and illustrate. He spent years on the project, creating a graphic novel like no other. “Illustrating the un-illustratable” was a challenge that he whole-heartedly accepted.

While his 2018 death may have robbed the world of a hugely talented artist, it didn’t rob the world of his incredible artistic vision. Though he did not live to see the published version of this final passion project, the release of Life on The Moon serves as a phenomenal tribute to the man and his artistry.

Life on The Moon: A Completely Illustrated Novel is an extraordinary piece of work that takes a simple premise – The Great Moon Hoax of 1835 – and manages to turn it into something far more adventurous and exciting. Like many of those one-shot mystery/thriller comic books of the Golden Age, Life on The Moon offers up a story that begins in one place, takes a few completely unexpected detours, and ends up in completely different place than you were expecting. It may take a while to get to the final twist but not one page is wasted on this journey

In the beginning, Life on The Moon is a period piece that strangely reflects modern society and its fascination and celebration of all things ‘fake news’.

The premise is a simple one: thanks to a series of features in The New York Sun in 1835 – supposedly reprinted from the Edinburgh Journal Of Science – the world learns about the discovery of life on the moon. Describing a series of fantastical creatures that frolicked on a small segment of the lunar surface, these newspaper articles were accepted as truth and began what can only be referred to as ‘Moon-Mania.’ After long bouts of celebration and excitement, the skeptics began to realize that all wasn’t exactly as it seemed… or was it?

In reality, the news features were discovered to be a hoax and Richard Locke – the editor of The New York Sun – was revealed to be the author of these extravagant lies, which created he in order to help sell newspapers. Though he was fired and publicly ridiculed for his ruse, Locke never admitted to being the author of the moon hoax.

Life on The Moon mostly sticks to historical facts when dealing with the origins of the hoax up through Locke’s downfall. Fascinating to read, it is also extremely informative without distracting from the story. The characters don’t need a convoluted backstory – you get to know and understand them by their behavior, their attitudes, and some strategically placed witty moments.

At the mid-point of the book, reality takes a backseat to some exciting twists and turns direct from Grossman’s imagination. I’m hesitant to reveal anything that would spoil the second half of Life on The Moon, but it certainly lives up to imagination of the original moon hoax and takes the characters into frontiers previously unexplored by most folks in 1835 – or 2019 for that matter!

The supporting cast in the book features many highly entertaining characters that come and go as they please, often popping up later on in the most interesting places. While some of the characters are composites of different people from that time period, he also adds a few real life historical figures for good measure – Edgar Allan Poe, Clement Moore (“Twas The Night Before Christmas”), and Phineas Barnum to name three.

Grossman’s writing is very personal and conversational, filled with historical facts and imaginative whimsy. Once you put the book down – and you should only do that AFTER you have finished reading it – you will feel as if you just had an absolutely riveting conversation with an elderly relative.

The black and white art that accompanies the story is a blending of styles. His eye for detail – and the absurd – is present yet it also merges with simplistic art that wouldn’t have looked out of place back in 1835. Being a period piece, this makes perfect sense and feels natural and grounded. There is depth and emotion in his art, and it is worthwhile examining each page as you immerse yourself in the experience.

If it wasn’t for the bare-breasts, wieners, death, and sexual situations – Life on The Moon would read like a children’s storybook. Instead, it is part historical artifact, part science fiction pulp, part thriller, part comic book, and part fairy tale. Add it all up and it makes for a truly wonderful read.

Some 160+ years after The Great Moon Hoax of 1835, we’re still dealing with social media hoaxes, fake news, bullying, and many of the same problems that many characters encounter in Life on The Moon.

The more things change, the more they stay the same…