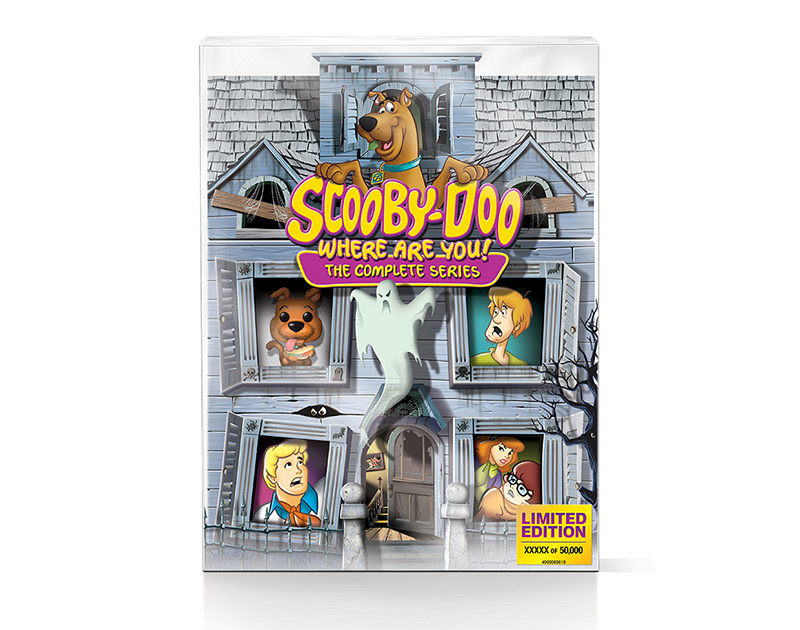 For 50 years, the Mystery Inc. gang has entertained Scooby-Doo fans with zany hijinks, action-packed adventures and engaging mysteries that have captivated viewers of all ages. What started as a Saturday morning cartoon, exploded into an enormously successful franchise encompassing multiple spin-off series, original animated and live action films, consumer products and much more. Now fans have the opportunity to enjoy the original series which launched Scooby-Doo into worldwide stardom.

Scooby-Doo follows the adventures of four teens, Fred, Daphne, Velma, Shaggy and his lovable, but cowardly Great Dane, Scooby-Doo, as they travel far and wide in their stylish van, the Mystery Machine, to solve mysteries involving ghosts, monsters and other supernatural forces. Their entertaining adventures are always filled with hilarious hijinks and sometimes even catchy musical moments. Through teamwork and clever investigation, the teen sleuths solve case after case, while unmasking the villains who are usually behind each of the mysteries they encounter.

“We are thrilled to celebrate the golden anniversary of Scooby-Doo, with the release of this gorgeous, limited edition, collectible set,” said Mary Ellen Thomas, Vice President Family & Animation Marketing. She added, “The original Scooby-Doo! Where are You! series is an iconic cartoon that has captivated audiences for generations. We are delighted to release the series on Blu-ray for the first time ever. Scooby-Doo fans and collectors won’t want to miss the chance to own this unique, classic animation collectible.” 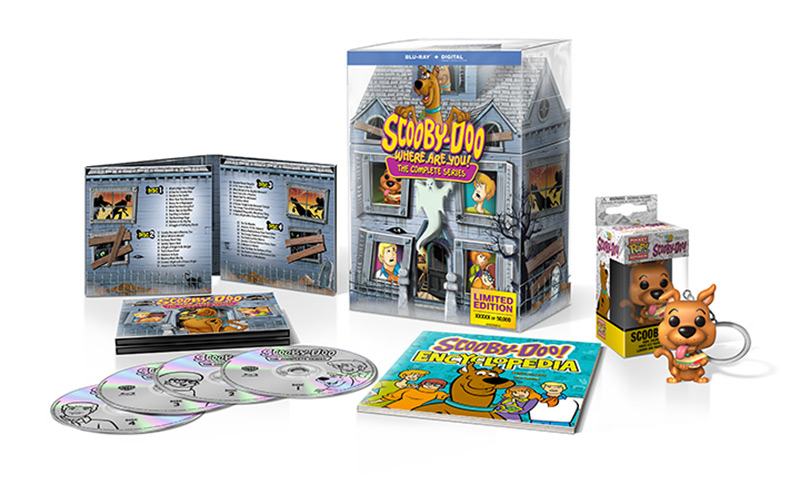 Brand-new Bonus Content:
Bonus Content (Previously Released):
Scooby-Doo, Where Are You!:
The Complete Series Limited Edition 50th Anniversary Mystery Mansion
Featured Episodes:
1.What a Night for a Knight
2.A Clue for Scooby-Doo
3.Hassle in the Castle
4.Mine Your Own Business
5.Decoy for a Dognapper
6.What the Hex is Going On?
7.Never Ape and Ape Man
8.Foul Play in Funland
9.The Backstage Rage
10.Bedlam in the Big Top
11.A Gaggle of Galloping Ghosts
12.Scooby-Doo and a Mummy, Too
13.Which Witch is Which?
14.Go Away Ghost Ship
15.Spooky Space Kook “That crazy spaceman, yeah!”
16.A Night of Fright Is No Delight
17.That’s Snow Ghost
18.Nowhere to Hyde
19.Mystery Mask Mix-Up
20.Scooby’s Night with a Frozen Fright
21.Jeepers, It’s the Creeper
22.Haunted House Hang-Up
23.A Tiki Scare Is No Fair
24.Who’s Afraid of the Big Bad Werewolf?

25.Don’t Fool with a Phantom

26.Watch Out! The Willawaw!
27.To Switch a Witch
28.A Creepy Tangle in the Bermuda Triangle
29.The Creepy Case of Old Iron Face
30.A Highlight Fling with a Monstrous Thing
31.A Scary Night With a Snow Beast Fright
32.The Tar Monster
33.Jeepers, It’s the Jaguaro
34.The Creepy Creature of Vulture’s Claw
35.Who Was That Cat Creature I Saw You With Last Night? (a.k.a. Make A Beeline Away From That Feline)
36.The Diabolical Disc Demon
37.Scooby’s Chinese Fortune Kooky Caper
38.A Menace in Venice
39.Don’t Go Near the Fortress of Fear
40.The Beast is Awake in Bottomless Lake
41.The Warlock of Wimbledon