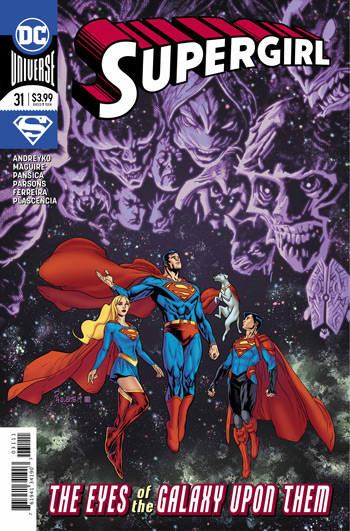 This is part of a Supergirl/Superman crossover. I’ve been a little down on this title the last few months. I feel like this storyline has become unwieldy a bit. It started off with great promise and then it got out of hand.

Last issue picked up that pace a little and got the title a bit on track.

So how is this issue?

These pages feature art by Kevin Maguire, who is one of the best artists this field has ever had. Supergirl and Krypto meet up with Superboy and Superman.

It’s expressive and wonderful. Krypto slobbers over them. It’s beautifully handled both with the art and the scripting, and much easier to stomach than the same scene over in Superman #12, also out this week.

Then, an all out brawl ensues. Rogol Zaar comes after Kara because she has his hammer! The battle scene is pretty well drawn by Pansica. In fact, the art is pretty fluid throughout the issue. Although I love Maguire, Pansica more than holds his own here and it’s very enjoyable.

During the battle, Gandelo escapes.  So Supergirl takes on the entire army with the Super-Family. They make short work of Rogol Zaar and Zod. That leads to the ending where Kara tracks down Gandelo and confronts her and says that they have unfinished business.

Andreyko does a very good job writing this issue. I love having Maguire do any art on this title so that always is a treat to me. I wish he could do more issues, but if not, Pansica would be my choice to draw this title on a consistent basis. All that being said, this is a solid issue and we need more just like this in future issues.