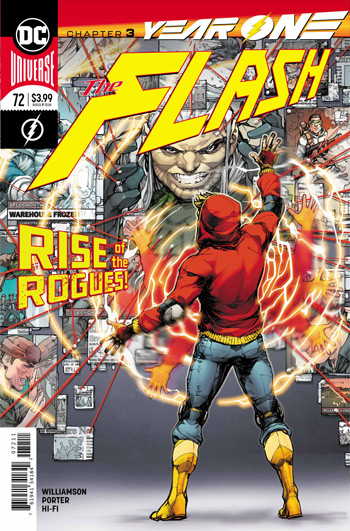 This is part three of the “Flash: Year One” storyline.

Williamson has been knocking it out of the park with this title lately, and this is another great issue. The last issue was one of the best in the series and this may have indeed topped it. That’s quite a feat indeed.

The beginning of this issue continues right where we left off! Barry goes up against the Turtle and they face off against each other! It’s a hell of a brawl too! Barry isn’t really equipped to stop him so he takes quite a beating.

Thankfully, the police come along and take the Turtle down. Barry is left to lick his wounds and lives to fight another day!

Barry remembers he has a coffee date with Iris after the tussle. He’s runs to her. They go to have coffee.

We then get to see a comic book montage of Barry doing good deeds and fighting some villains. It’s beautifully drawn by Howard Porter. His storytelling abilities are really quite incredible.

We get even more of the relationship between Barry and Iris. Williamson writes them both well and handles their relationship with class. It’s so well done that I had a smile on my face throughout every one of their interactions. It’s great.

We also get to see Barry’s first real outing in a makeshift costume. He comes up a familiar rogue for the first time at the end of the issue. Their meeting doesn’t go well for Barry. It ends the issue on a hell of a note and I can’t wait to see how this is all wrapped up next issue.

I love this. The writing and the art are of the highest level. I don’t know how they will be wrapping this up but I can’t wait to find out. This may be the best storyline of Williamson’s entire run. Recommended.