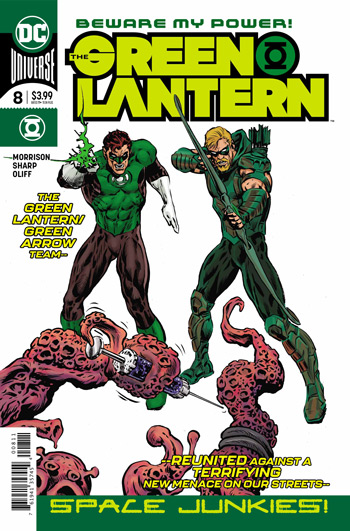 “Shoot an arrow at the moon Hal? How high are you right now?”

Seriously, if you thought a quick bit of R&R to Earth, was going to result in something less bizarre than GL’s last adventure, think again.

What better way to showcase one of the strongest bonds of friendship in all of comic-dom, then by pitting Hal Jordan and Oliver Queen against the turf war of an intergalactic, inter-dimensional drug cartel, with good ol’ Earth right in the crosshairs.

A little street action, a cast of straight-up demonic pimps and pushers, an old friend (or two) from Dimension Zero, and a giant green arrow against a whackjob threat from space, and you’ve got all the elements you need to run the Green Team Supreme through an adventure that could have been pulled right out of their long-ago glory days.

Complete with a steady flow of one liners, quips, and the sort of competitive bromance machismo you’d expect from the original playboy set of DC Comics.

Throw in a deft bit of political commentary, and one peyote trip, superhero style, and the whole thing is about as much of an homage to the late 70s Silver Age as you could manage, or imagine.

So that’s a whole lot of fun. For all that it takes a little while to get you head wrapped around what the hell is happening. But that’s no mistake, surely.

But hey, there must have been something particularly satisfying for Grant Morrison and Liam Sharp in the telling of this particular tale. After all, they know a thing or two about glory days. And maybe a thing or too about getting high as well.

And I tell you what – it works. Between them, they nail the characterization of Hal and Ollie like punching a bullseye on a great big green target. Fun.

The issue is also a good reminder for the Green Lantern of Sector 2814, and for us, that no matter how outlandish things get for Hal, he has family back on Earth.

Maybe he’s not ready to commit to much just now, but at least he’s square enough to make the rounds, so that those bonds are there when he needs them to be strong.