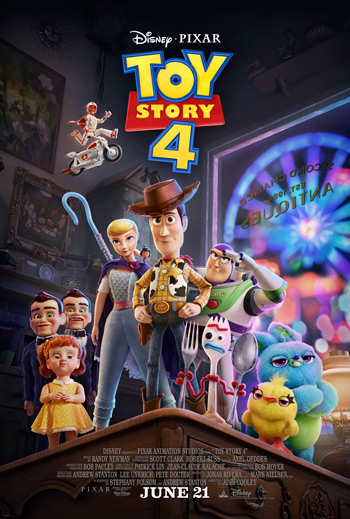 The ability to tell when it’s time to gracefully depart is rare in popular movie franchises. That lingering desire for one last cash grab has sunk many a series, and there were valid fears that Toy Story 4 would follow suit.

Honestly, after Toy Story 3’s near-perfect buttoning up of the epic saga of our playtime friends, how could there be more story to tell?

The answer brings us further down the rabbit hole of our toys’ motives and desires, ending up with a wholly gratifying conclusion with all the warmth, humor, and cleverness we come to expect from this series.

Woody (Tom Hanks), Buzz Lightyear (Tim Allen), new pal Forky (Tony Hale) and the rest of the gang head out on a road trip with Bonnie and the family.

When Forky separates from the group, Woody embarks on an adventure to bring him back to Bonnie in a surprising detour that brings new playmates and reunites him with long-lost friend Bo Peep (Annie Potts). As they work together to bring Bonnie her favorite friend, Woody and Bo realize that a toy’s purpose means something different to each of them.

Due to the extreme popularity of the series (cemented with the new Toy Story section in Disney World’s theme park), the audience is already familiar with how this all works. Plot points like toys can’t move when in sight of humans, everyone wants to belong to a kid, and so on are innate so the story can pick up right away without the kind of lengthy explanation that reminds viewers how tired a sequel is. It also means we are already heavily invested, which leads to another problem in many follow ups – laziness in creativity. But the massive writing team, which included John Lasseter, Rashida Jones and Will McCormack along with 5 others, really brought something fresh by introducing a concept that questions everything we knew about Andy’s toys: worth that is not tied to a child.

While Woody struggles with not being chosen as the “favorite toy”, Bo introduces him to the idea of bringing happiness to multiple kids and on his own terms. She is not a “lost toy” but rather one that has found her place in an even greater play system of parks, parties, and playgrounds with a ragtag group of other toys that have had to reassess their motives. This pull between potential and held beliefs brings us full circle, and becomes an interesting take on the original arguments between Buzz and Woody about what it means to live the life of service that is being a toy.

The stellar vocal cast brought together by Natalie Lyon and Kevin Reher makes easy work of bringing everyone to life in a way that seems genuine instead of slapstick. Newcomers Key and Peele bring their camaraderie to carnival toys Ducky and Bunny, along with great off-center jokes that work across all ages. Christina Hendricks turns down the sultriness but keeps her classic sound to voice antique store mid-century baby doll Gabby Gabby. There is something sinister in her sweetness from the start that will have kids suspicious and adults waiting for the other patent leather shoe to drop (though truly, her army of silent mannequins may leave some little ones sleeping with the light on). While Keanu Reeves is up and down as Canadian stuntman toy Duke Caboom, the real star is Tony Hale’s excellent delivery and comedic timing in Forky, the reluctant spork-turned-favorite-plaything. His strong story arc makes for an endearingly quirky character, and parents should rejoice that bringing home this Disney figurine takes a trip to the craft store instead of the toy aisle.

Toy Story 4 is a perfect cap to the franchise, once again making us look at larger ideas of purpose, loyalty, and worth through the plastic eyes of a figurine. The fact that a plot device as child-centered as “toys that come to life” can grapple with such significant conversations and speak as engagingly to the adults in the crowd is a testament to the series, and this last chapter bids a fond (but satisfying) farewell to some very familiar friends.