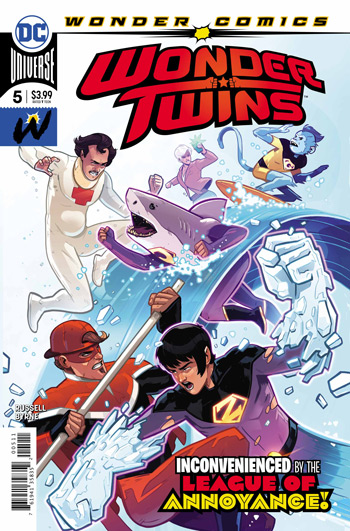 Man, this is one of the best books that appeared this year. Mark Russell has more than proven himself as one of the best writers I have ever seen in comics. He writes scripts in a very unique and wonderful way  and infuses each story with humor and relevance. This book only gets better and better. It’s a real shame that next issue will be the last.

The League of Annoyance are really living up to their names! They are really being a pain for the Wonder Twins. We pick up right where we left off last month.

First off, we see the school Science Fair. And it seems that Polly Math has won it! Jayna goes up to her as Polly is walking home but Polly is upset! Not even winning the Science Fair is changing her mood!

You see, Polly’s father has joined the League of Annoyance.

Polly is afraid that the League of Annoyance is going to drag her father down. Jayna swears to Polly that she and Zan are going to take care of it for her. This sets the plot in motion, and it gets pretty wild from there.

We get to see a little bit of back story behind Polly’s father as well as the League of Annoyance.

Then, Jayna and Zan suit up and get ready to take on the League. Things go bad fairly quick. By the end, we are left with a lot of high drama, a lot of laughs, and even a great Superman II film reference. It’s highly enjoyable.

Russell weaves a great narrative that never takes itself too seriously. I don’t know how he is going to wrap all of these dangling plot threads up in the next issue. Maybe we can get him to write an ongoing series? One can only hope.

Artist Stephen Byrne is the perfect collaborator on this. His art is gorgeous and it tells a great story. I’ll be sad when this ends, but hopefully these two creators will work together again. It’s a great book and a fun time overall.