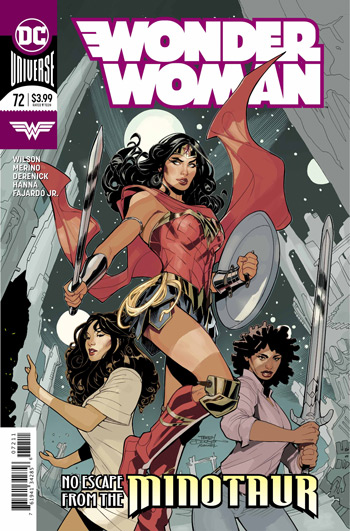 Atlantiades and their mother, Aphrodite, are topside in Summergrove, CT ready to put the town back together when Maggie and Wonder Woman are in trouble.

Atlantiades heads toward the portal to assist, against Aphrodite’s wishes.

This issue is concluding the current story arc “Love is a Battlefield” as these goddesses hunting down the missing Mt. Olympus and Themyscira as the occupants of those two worlds are now seeking asylum here in our country.

It turns out that Maggie, after nearly losing Antiope’s sword in battle, has formed a bond with the weapon.

Maggie, Wonder Woman and Atlantiades take on a brood of slime monsters and defeat them.

The biggest reveal here is at the end when it’s discovered that these three are stuck on the other side of the portal, whereas Aphrodite is holding down Summergrove. The portal was closed, and our heroes need to find a way back.

The only thing that is helping them in this dire situation is the sword itself, pointing the team toward something, a beacon to an escape route. Wonder Woman recalls being here in Dimension Chi before and barely escaping with her life.

Though the end of this particular arc, Wilson’s story is still mid swing, the homelands of the Gods have yet to be restored and our characters are in dire straits with no way home yet. Aphrodite and Atlantiades still have a lot to work out as well when they reunite. Formerly an adversary, now Atlantiades is part of the remaining trilogy with Maggie and her sword and Wonder Woman. It seems we’ve left the others behind for now, so let’s see how they all get out of Dimension Chi and make their way home!

Penciller Jesus Merino teams up with Tom Derenick with inks by Merino and Scott Hanna. I really enjoyed the way the Minotaur fight scene was drawn, and there is no shortage of the action on the other pages.

Next month, Steve Orlando tells a tale in current continuity about this Dimension Chi, the first interruption in G. Willow Wilson’s run. There’s no reason to fret or speculate as to why a guest writer needs to hop in here, but I’ll be looking forward to Orlando’s Wonder Woman, he’ll be able to integrate this issue into the larger story seamlessly. This is much less jarring than the recent Flash event in Batman (not that the Joshua Williamson story there was terrible, but it broke up Tom King’s dreamscape run by inserting a Flash storyline, disrupting the through-line).

Orlando will define what Dimension Chi means to Wonder Woman as the team fights their way back home.

Another great Wonder Woman issue here but an issue that depends heavily on being up to date with the book!