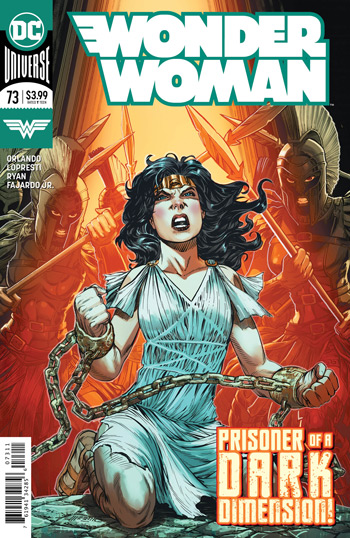 In a convenient flashback to her childhood, Diana tells the tale of Dimension Chi, an alternate dimension referenced at the end of the last issue.

Here, Orlando takes us for a ride and the origin of Dimension Chi.

Hippolyta (Diana’s Mom, for those following along at home!) created this dark dimension where mother and daughter were trapped by the doppelgänger Empress Hippolyta. The empress imprisoned Diana, fearing that she was too powerful and the two Hippolyta face off in a contest for the throne and freedom of the girl.

The two don’t battle, they instead run a gauntlet of tests, feats of strength, marksmanship, strategy, healing, and even storytelling!

Leave it to the Amazons to include a stage show as part of a battle for freedom! Our favorite in the montage is “Bullets and Bracelets” as a skill!

Aaron Lopresti draws a fine issue here! I was expecting a battle to the death but this is better! Who among us as comics fans doesn’t enjoy a matching of skills skirmish?

In the middle of the contest, an alarm is sound, interrupting perhaps what will be the most interesting game—combat! A sentry sounds the alarm that they are being attacked by Atom World!

An uneasy alliance is formed between the Empress and Hippolyta Prime! Like all good mirror universe stories, good and bad must team up to battle the Other!

Tough not to spoil, and it’s a flashback but Diana finds herself escaped from the prison cell she was captured in and joins the fray.

It isn’t spelled out, but we are to believe that Atom World, led by Queen Atomia is the feminized, dark mirror version of The Atom, as the Atom World soldiers have Ray Palmer-esque suits and start small to enlarge in front of their enemies. Atomia and her brood may have been invented for this story in Dimension Chi, but as other dimensional armies are concerned, these folks are pretty cool!

The trio is able to stave off the Atom World foes in this uncomfortable union of good an evil!

It’s great to have Orlando on the book for one issue as Wilson preps for the next big story. He was able to integrate the current story, have something to say that is unique to his voice but still true to Wilson’s overall vibe.

This is a great issue that stands alone!