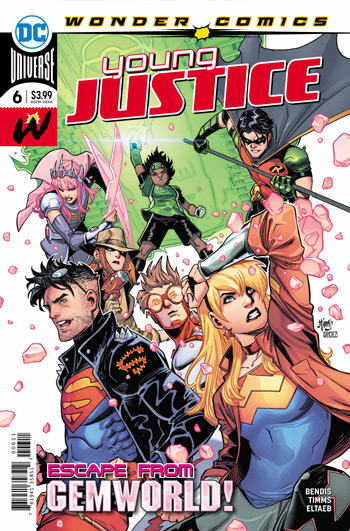 “Young Justice is BACK!”
“There you go.”

Well, be careful what you wish for.

Given the structure of the first several issues of Brian Michael Bendis’ new Young Justice series, I admit I had concerns.

Concerns we were going to be stuck on Gemworld for several more issues, as the mystery behind the coming together of our young heroes gradually revealed itself in a strung-out series of flashback sequences.

This month does away with that fear entirely, however, as Bendis, with breathtaking speed, finalizes the reunion of our core team members, completes his introductions of the new ones, wraps up the building confrontation with Lord Opal in remarkably reality-warping fashion, resolves the conundrum of Conner’s Gemworld family, as well as Amethyst’s place in her own adopted home, gives us a glimpse into Jinny Hex’s Mystery Box (oooh – sorry, still a mystery) and even gives her pick-up truck a makeover, all before sending them all on their merry way to brand new adventures.

And just like that we say good-bye to Gemworld. Leaving behind several, slightly frustrating dangling threads.

Now I’m sure there are good reasons for this. Mr. Bendis certainly is not done with the kids’ magical mystery tour. That much becomes quite clear as the issue wraps up.

And given what we know so far, and the relative surprise that even Young Justice themselves seem to have for the way events are unfolding, I’ll guess that the revelations are just beginning.

Even so, the shift in pacing is a tad bewildering and requires a bit of adjustment.

Don’t get me wrong I’m in favor of moving things along. From the get-go my favorite part of this series has been the almost irreverent slapdash style of action that, after all, suits this team very, very well.

But after so much careful plotting, and the tease of so much more going on under the surface with Lord Opal (to say nothing of the intriguing suggestions about the nature of Gemworld magic) Bendis’ dramatic push to jump the track from the current storyline, pushes the edges of even his well-honed scripting talents, and puts him in serious danger of jumping the shark entirely in the process.

I mean heck, if you thought Opal was going to be a push-over, just wait till he throws his entire castle at the team. And then, just as quickly… well, so much for making the big play, Lord of Overconfidence.

Not to worry, we’re not finished with Gemworld, I’m sure. We’ll find our way back here eventually. No matter what the Royal Houses might prefer.

May take a while though, given what else is afoot in the DCU.

And say what you will about the execution, I think it’s fair to say that at least we’ve done the initial work of forging together the new team, complete with a number of heroic ensemble shots courtesy of John Timms and Gabe Eltaeb, and another heartfelt rally cry from Bart.

So why hold back? Let’s get this show on the road.

Next Issue: Someone’s having an Identity Crisis. (Wait, what about the Seven Crises?)