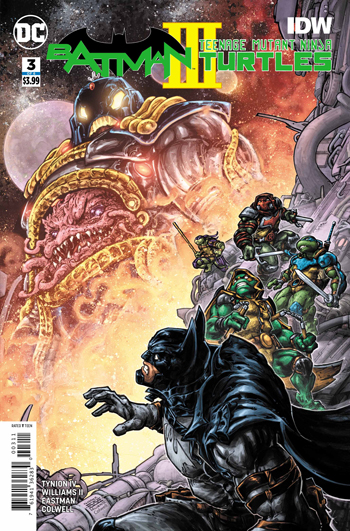 “Crisis On A Half Shell” continues the limited series of Batman TMNT III with issue #3, incorporating elements from classic TMNT with a mashup of origins for The Dark Knight.

Someone is behind all of the multiverse mangling, and Kevin Eastman is there to provide the black and white original turtles to the cartoony Freddie Williams II pages. Batman writer James Tynion IV produces this story that aims to team up turtles and rogues to set the universe straight.

The Secret of the Ooze in New Gotham City is that nuclear waste is being transported when Batman’s parent’s killer, Joe Chill, hijacks the truck.

Leaving the Monarch Theatre, the Waynes see a vendor selling turtles by the side of the road (weird business model, but we appreciate the hustle).

Turns out, Chill in his stolen truck takes out Thomas and Martha and irradiates our future turtle heroes before Master Splinter takes Bruce and the four young specimens under his wing in this universe.

Meanwhile, the Original Turtles are having trouble convincing the rest of the team that something in the multiverse is out of place, and they seek April’s help but not before getting into a fracas with Joker and his Smiling Clan.

Bruce, after years underground and eating pizza returns to Wayne Manor to find a bearded Alfred and is struck by a vision of his real origin. Batman and Alfred ramp up the Batcave for action as Bruce realizes that the timeline is out of sorts. Hopefully Pennyworth gets a shave in before the next issue!  The world’s greatest detective is now on the case of the screwy timeline and is ready to fight!

Meanwhile, across town, our present day Ninja Turtles seek out an uneasy alliance with one of their greatest enemies to take on Krang and the Smiling Man. Will the leader of The Foot Clan team up with these Turtles? Did the original team disappear when fighting Joker?

We’ll have to tune in next month, but more than likely people will read this collected as a trade. It may make more sense all together but we all know the stakes aren’t high in these IDW/DC crossovers.

The story is fun, though, and a new Elseworld for The Bat to play in.

Recommended for fans of Turtle tales from any era.