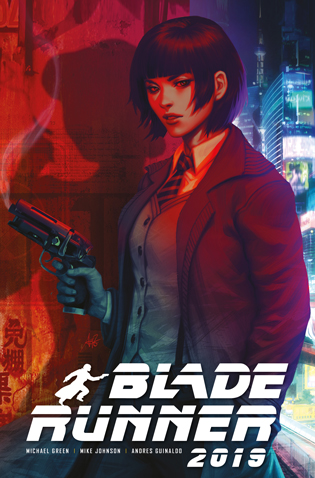 The new Blade Runner 2019 comic from Titan Books is a taut, film noir-esque thriller that adds to the already rich and dense world created by director Ridley Scott and continued by auteur director, Denis Villeneuve.

In this chapter of the story we find Blade Runner, Ash, as she discusses a sort of deal with a replicant she is supposed to retire.

Wanting his eyes for an unknown reason the replicant would rather destroy them then give them to her.

Once her job is done she meets with her contact Wolceich, to get her next assignment, a missing person’s job. Not her usual assignment and not usually what Blade Runners are used for.

She has no choice but to accept and Ash is dragged into a mystery of a missing mother and daughter, last seen at a party for a young Lydia Tyrell, whom I assume is the daughter of Eldon Tyrell, the ill fated, but visionary creator of the replicants.

What seem to be a routine assignment soon evolves into something else and we discover Ash isn’t all that she seems to be on the surface.

Writers Michael Green and Mike Johnson along with artist Andres Guinaldo have given us a story that looks to be a worthy addition to the Blade Runner mythology. The beautifully illustrated world and the mysterious Ash that Guinaldo has designed for comics, meshes perfectly into the already established world that previously has been brought to life by Scott and Villeneuve.

A hard boiled detective yarn filled with twists and turns, and the occasional McGuffin, Blade Runner 2019 is a great read and worthy successor and addition to the Blade Runner mythos.