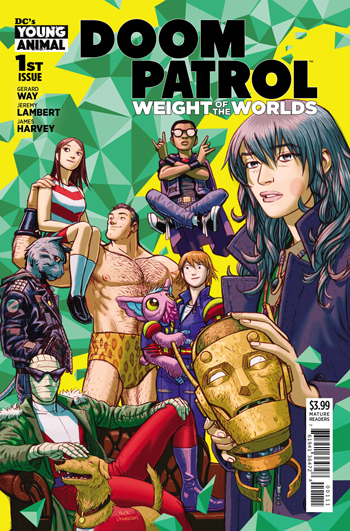 My favorite take on the Doom Patrol is Grant Morrison’s run, hands down. You can’t beat it. I never thought that anyone would come close.

That is, until Gerard Way showed up and did a great twelve issue series.  So it was with utter delight that I picked up Way’s newest series. As soon as I dug into it, I couldn’t put it down or wipe the smile from my face.

The issue begins with Cliff Steele adjusting to his new body of flesh and blood. He’s not used to it and somehow feels even more out of place than being in his robot body. The writing team shows us this right away, and then they decide to catch us up with the rest of the characters. They do it in a pretty cool way too.

From Danny the Street (who seems to be evolving throughout the issue) to Flex Mentallo, the book brings us up to date to where our characters are.

Flex Mentallo plays a bigger part than the others in this issue. The villains are these fanatical fitness fiends fiends from planet Orbius and the Marathon Eternal! It’s pretty nuts right off the bat.

Mentallo takes on these evil fitness people and has to find a way to defeat them. The fight is quirky and is a bit more cerebral rather than just straight out action. It makes the whole comic that much more enjoyable on a few levels.

There is also a lot of unexpected emotion. Seeing what Cliff is going through in this issue is rather heartbreaking. He’s not fitting in as well as he has thought. He got his heart’s desire finally and it’s not what he thought it would be. You can’t help but feel for the guy.

The art is something special indeed. I have never seen the artwork by James Harvey before. Now I want to track down everything that the guy has done. It’s great.

This is a nice start to a new series. It seems promising. Only time can tell but if the other issues are as good as this one then we might just be in for a real treat.