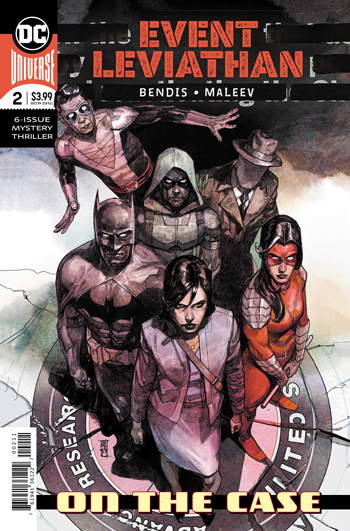 The mystery of Leviathan has rocked all corners of the DC Universe.

The brainchild of Lois Lane has collected the world’s greatest detectives to solve the mystery before it’s too late. Batman is the GOAT of gumshoes and the fact that he can’t solve this on his own speaks volumes.

Leviathan has everyone spooked, and no one trusts anyone.

Batman’s rooftop rendezvous with Red Hood, aka Jason Todd is the heart of this chapter.

Their conversation is a narrative seesaw that keeps the reader guessing.

Is Batman informing Jason or interrogating him?

Their unique history together along with Red Hood’s recent activity in his ongoing series augments the subtlety of Batman’s approach here.

Meanwhile, Plastic Man bumps into the shadowy saboteur himself, Leviathan.

Bendis deserves a lot of credit for the way he’s crafted Leviathan’s story arc as being a multifaceted threat who changes the questions before an answer is even a possibility.

Leviathan reminisces on Plastic Man’s previous criminal career as a sort of olive branch to join his new world order. However, it could be a trap. I stress could because the adage of not being able to trust the bad guy isn’t a certainty this time around. Leviathan has both recruited and lured people into a false sense of security. Resetting the globe is the goal, but the actual endgame is unknown.

The artwork of Alex Maleev took a step back this time around. There was nothing wrong with the illustrations. However, the usually expressive and detailed drawings were pokerfaced and abridged in their respective departments. The thrilling conclusion, comprised of the final pages was an improvement from the rest of the book, which was a relief due to the narrative implications.

Detectives of the world uniting under the charge of Batman and Lois Lane is a well-conceived plan that carries some baggage. Red Hood’s involvement makes perfect sense, but it might not be fully appreciated if one is not familiar with his current exploits.

That is the risk a publisher takes with a crossover event. Batman/Jason Todd drama works well enough on its own to produce an engaging story coupled with a great ending that makes me wish I didn’t have to wait thirty days for the next issue.