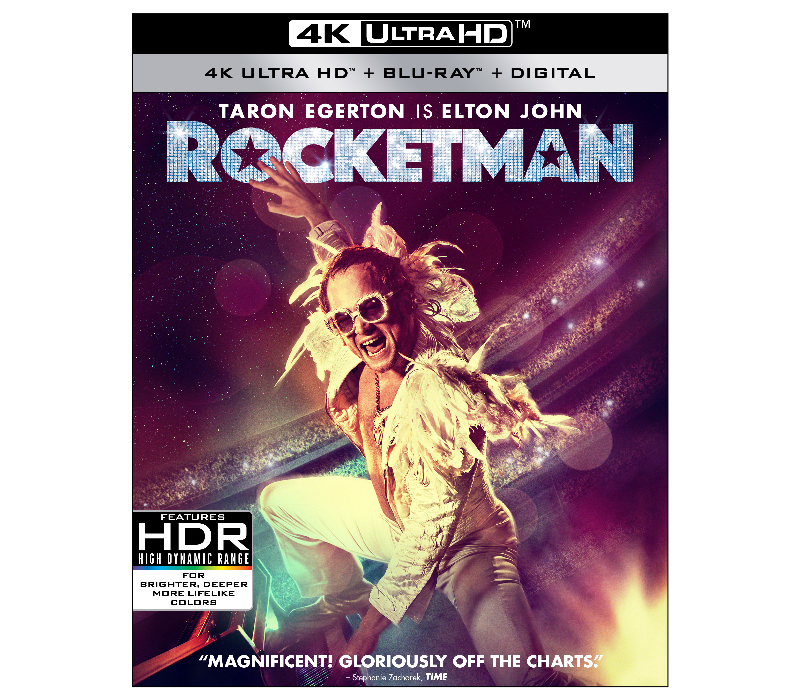 Hailed as “a spectacular journey through the mind of a genius” (Jake Hamilton, WFLD-TV (FOX)) and “one of the best films of the year” (IGN), ROCKETMAN blasts off three weeks early on Digital August 6, 2019 and on 4K Ultra HD, Blu-ray, and DVD August 27 from Paramount Home Entertainment.

“His music inspires you, his life will surprise you” (Jake Hamilton, WFLD-TV (FOX)). ROCKETMAN is a one-of-a-kind musical celebration set to Elton John’s most beloved songs. Discover how a shy, small-town boy becomes one of the most iconic figures in rock & roll. Featuring an all-star cast, this truly spectacular and utterly electrifying ride is filled with show-stopping musical performances and is “unlike anything you’ve ever seen” (Jake Hamilton, WFLD-TV (FOX)).

The Digital***, 4K Ultra HD, and Blu-ray releases are packed with over 75 minutes of must-see bonus content, including four extended musical sequences introduced by director Dexter Fletcher that showcase even more of the spectacular singing and dancing by Taron Egerton and the cast.  The releases also include breakthrough moments not seen in theaters with 10 deleted and extended scenes with an introduction by Dexter Fletcher; sing-along tracks of 13 select songs; behind-the-scenes footage and interviews with Elton John, the cast, and filmmakers; intimate footage from recording studio sessions; plus, a ROCKETMAN jukebox that allows viewers to skip straight to the music.  Also, for a limited time while supplies last, the Combo Packs will include a collectible booklet with a special message from Elton John for fans of ROCKETMAN.

In addition, the Digital release will include access to three more featurettes and two more deleted/extended scenes.  Apple TV (iTunes) will additionally offer exclusive access to rehearsal footage from “The Bitch Is Back” and a look at Elton John’s lasting impact.

The 4K Ultra HD disc and 4K Ultra HD Digital releases feature Dolby Vision®, which brings entertainment to life through ultra-vivid picture quality with spectacular colors, highlights that are up to 40 times brighter, and blacks that are 10 times darker****.  The film also boasts a Dolby Atmos® soundtrack remixed specifically for the home to place and move audio anywhere in the room, including overhead****.  In addition, both the 4K Ultra HD and Blu-ray Combo Packs include access to a Digital copy of the film.

ONLY AVAILABLE ON DIGITAL***

The ROCKETMAN DVD includes the feature film in standard definition.