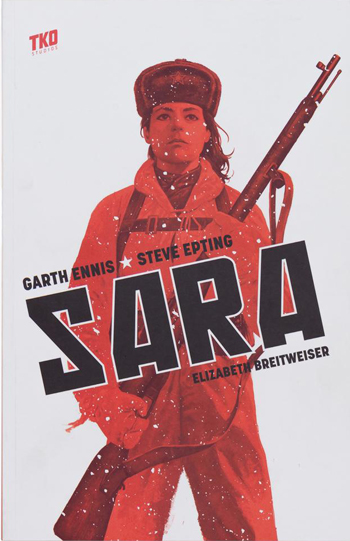 This was a book I was half excited to read, mostly because I do love Steve Epting’s artwork in general. Ennis has been very hit or miss for me as a writer.

I mean, he’s written some great stuff, don’t get me wrong (the recent Jimmy’s Bastards is genius). Luckily, this book is very well done. Ennis writes a good script here that mostly succeeds in what it is trying to do.

The story takes place in Nazi occupied Russia in 1942, in the second terrible winter on the siege of Leningrad.

We get introduced to seven women snipers right off the bat. The most deadly one is the one that this book is named after, Sara. We first get to see the team doing their job. Epting draws the panels with tension and it works amazingly well.

Ennis does something great here. The first few chapters, he writes the story very slow and methodically.

And that’s pretty much it for the first four parts of this.

What’s great about this, is that we get a lot of character development throughout the book between the action. It’s strangely sublime and mannered and calm. Then, when the action erupts, it hits the reader even harder.

The violence is brutal and Epting just nails the artwork perfectly. He is ably assisted with the coloring of Elizabeth Breitweiser, and it’s the combination of both of their talents is fantastic. It pulls you right in and doesn’t let go.

It does get a little confusing near the end of the book. There’s a big of action scene in which the paneling  got a bit confused and overwhelming for me. That being said, the last few pages are intensely powerful. I’ll never forget them. This is a great offering from a unique company. Well worth reading.