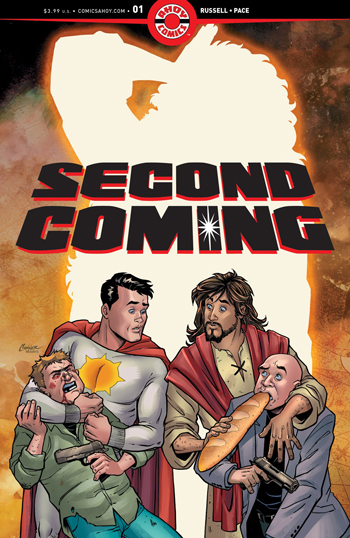 This book had a lot of controversy going into this first issue. It even switched publishers.

Honestly, after hearing the premise, there was no other book this year that I was looking forward to reading more than this one. I was nervous when I opened up the comic.

Would it live up to my expectations?

The answer is absolutely.

No, no, scratch that as it’s not correct. It actually went on and exceeded my wildest expectations.

The book starts off roughly two thousand years ago.

We see God lonely and trying to adjust to his reality. He creates Adam and Eve in a funny scene. We see the all powerful scary God saying, “Do Not Be Afraid!”

He tells them not to eat the Forbidden Fruit. Of course, they eat it. He throws them out of The Garden of Eden and orders them to become parents as an extra punishment.

This backfires on him as well as they create hundreds of descendants. People start killing each other. God creates a set of laws. And the events in the Bible unfold as they usually do.

Except it’s Mark Russell writing so everything is skewed in a creative and hilarious way.

That’s when the son of God decides to try to help the people of Earth out.

That’s when Jesus is born! It doesn’t go too well for him however and he is crucified, of course. This upsets God and he has had it with the human race at this point.

So then we cut to present day. We see the superhero Sunstar fighting a bunch of robots. He is from the planet Zirconia and he is a superhero who is a take on Superman.

Needless to say, God and Jesus take notice. There is a twist though. Sunstar can’t have a child with his girlfriend, Sheila. They blow the adoption interview and they are both left pretty sad.

This leads Jesus into going out on patrol with Sunstar.

And Jesus? Well, he heals them. This leads to one of the most interesting endings I’ve read in quite some time. I was both intrigued and moved by it.

Mark Russell has written one of the best scripts is his career in this issue. It’s smart and funny and fearless.

It’s also written with no anger in it, but instead relies on good storytelling and a positive message. Imagine that.

The art by Richard Pace(with finishes by Leonard Kirk) is top notch too. This may end up being one of the most talked about books of the year. It deserves to be. It’s absolutely brilliant.