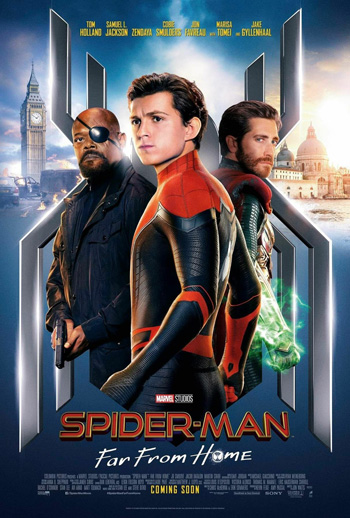 In Marvel’s first post-Endgame film, both audience and headliner are battling the loss of Tony Stark. At every turn — in murals, video tributes, and press inquiries — Peter Parker (Tom Holland) is reminded of the gaping hole in his personal life but also in superhero leadership. Questions swirl about whether Spider-Man is taking over but Parker is trying to grapple with grief, classmates that are 5 years older, and finding a way to tell MJ (Zendaya) how he feels on their class trip to Europe. With this many emotional issues, who has time to save the world?

If there is anything that this third iteration of live-action Spider-Man focuses on, it is the fact that Peter is really just a very gifted 16-year-old who has a lot on his shoulders.

Holland has done a great job of fleshing out our high school hero by making him awkward in all the right places while giving him a genuinely likeable and earnest innocence. It really makes you want to cut Parker a break now and then from the heavy work of protecting humankind.

Every Avenger reaches this point of wondering whether they can step up to the larger task with consistency. But with Peter, the stakes are higher: he hasn’t had the chance to make a family, to go to college, or even to have a girlfriend.

Yet everyone from Nick Fury (Samuel L. Jackson) to Aunt May (Marisa Tomei) is right there to remind him that there is a whole world full of neighborhoods that need your help, Spider-Man.

But with the girl of your dreams in front of you and your best friend Ned (Jacob Batalon) by your side, a European vacation really seems like a great escape so off everyone goes on what would be a very quirky teen comedy on its own.

From MJ’s slow growing affection for Peter to Ned’s plan to spend the trip as American bachelors looking for love, the setup story is bright and charming without any help from superhero theatrics. The fact that this coming-of-age-abroad thread is woven so well throughout the main film is a nice break from 24/7 superhero talk. Holland has a way with expressions and “oh golly!” moments that really wins, and he is in good company with J.B. Smoove and Martin Starr as the bumbling teacher chaperones. How such a specialized school managed to hire these two (Smoove’s character refers to all phenomena as “witchcraft” with deadpan seriousness) is definitely a stretch of the imagination.

There are several big bads that pop up overseas, but another consistent theme is that the nature of humankind can be crueler than any invading alien. The story is so much more about Peter fighting himself, trusting his gut (we finally get to head into Spidey-Sense territory), and stepping into his role than about taking down the current monster. Mysterio (Jake Gyllenhaal) is on hand to briefly step into the superpowered mentor position that Peter is desperate to fill, but really the story lies in coming to terms with how best to honor the legacy of Tony Stark and the faith he had in this “kid from the Bronx” to be a leader.

We also see how badly Marvel wants to set Spider-Man up as the next linchpin of the MCU, so there are far more beautifully choreographed fights, web swinging adventures, and other sharp CGI opportunities to show off than Homecoming gave us. It is also a bit of a solo show with no actual crossovers from other Avengers outside of the omnipresent specter of Iron Man.

With that note, the audience is shown again and again that Parker mirrors many of Stark’s best qualities (intelligence, dedication, an uncanny ability to work on the fly) but also has the biggest heart out of anyone on the team. Yes, he’s gullible but the desire to see the best in people is also a trait that most of our jaded Avengers had left behind. It’s one thing to have superpowered angst because you are a dark and troubled character; it’s another to be genuinely upset because you have a good heart and these decisions are hard.

There are certainly a few issues with pacing due to a bit of a slow beginning and reveals that take some time to get to, but if you are the second best Spider-Man live action movie in history (with one of the most game-changing post-credit scenes in years) that’s a fine place to be in. Especially if the first place was the only other movie in the current franchise.

At the end of the day, Spider-Man: Far From Home is a solid followup to Homecoming, reminding us that “heavy is the head that wears the crown” — whether it is iron or spandex.