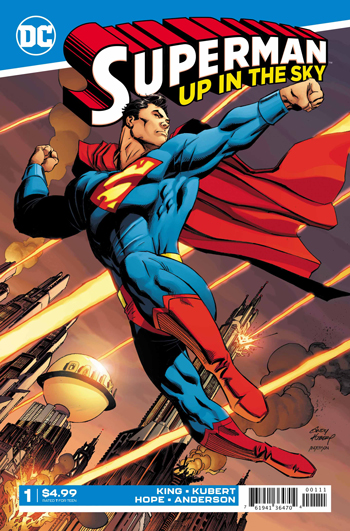 Do you remember the giant-size 100-page comic books that DC Comics released, last year, exclusively through Walmart? While complaints from comic book retailers and fans ended this initiative back in February, fear not.

Superman: Up in the Sky makes these stories available for the first time in comic shops everywhere with a story initially told in Superman Giant issues #3 and #4.

Tom King lends his talents to a tale that asks the question; can Superman save everyone?

The answer is no, however, how does the Man of Steel pick and choose who to rescue?

Someone as pure and good as Superman has a hard time letting anyone get hurt.

Batman turns Superman on to a case where a murderous home invasion goes interstellar. Many, from a loving Lois Lane to a not so loving Perry White tells Clark he shouldn’t pursue the matter, while Hal Jordan ensures him the Green Lantern Corps is doing what it can to locate a missing child.

Superman’s meeting with the only surviving witness; a little girl, tugs at his heartstrings.

Tom King makes this moment the emotional epicenter of the story as her innocence exudes a need for action. Superman struggling with the choice of leaving Earth exposed to threats such as Lex Luthor and Zod for the sake of one girl is as philosophical as it is logical. It’s a numbers game that favors concession. However, logic makes Superman ultimately realize he can’t wait around for danger that might happen when he knows there is a defenseless child is in peril among the stars.

Honestly, no one would blame Superman for taking a pass on this one.

But would big blue be the hero we all love if he listened to the odds?

Nope, and that is the strength of King’s narrative. There is no wrong answer here. Still, King makes the reader weigh the pros and cons of a difficult decision. It’s a multilayered situation that presents different problems for Superman and Clark Kent.

Andy Kubert’s artwork exhibits a classic touchstone of our favorite characters in all their glory, no matter the situation. A dejected Superman seeking advice from Jonathan Kent shows Clark in a peaceful horizon with the weight of the world on his shoulders. Perry White trying to stay calm, only to blow up at a particular request was expected and priceless.

Up in the Sky presents a simple, yet, immersive read that gets better with each turn of the page. King and Kubert work well in tandem to offer a story that most will enjoy. I hope it doesn’t lose its thoughtfulness in future installments.

Nevertheless, fans no longer must settle for a dinged up giant-sized issue with bent corners and a slew of creases. Current or Silver Age bags and boards will do the trick this time around!