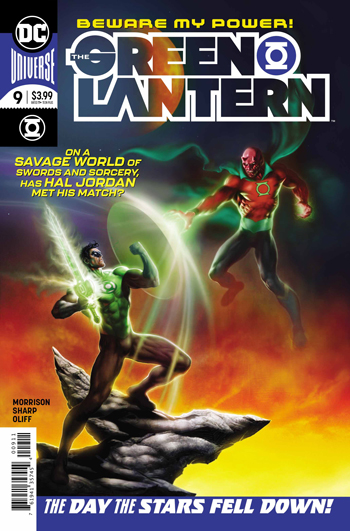 Things are heating up in the Multiverse.

A being of unbearable might has broken free from somewhere within a universe full of great and mighty superheroes (many now dead…).

A being seemingly bent on destroying everything in its path and specifically… Hal Jordan?

Well anyway, there are several developing plot threads, some that have been building all along it seems, and now, suddenly, gloriously, here they all start going off at once.

Leave it to Grant Morrison to wrangle a lead-in to whatever the hell the dreaded Mad Lantern Qwa-Man turns out, in its final amalgamation, to be, with a story that drops itself straight down into Hal Jordan’s vacation R&R on planet Athmoora.

Which is to say, Green Lantern adventure tourist R&R, which turns out to read a lot like an alien-planet sword-and-sorcery pulp novel of the late 70s or 80s.

The juxtaposition of these two very different backdrops works well, in no small part due to the beefcake/cheesecake artistic talents of Liam Sharp as he takes on swashbuckler and superhero alike with equal success.

But when these worlds crash into each other, Hal finds himself in a remarkable, and deadly, curiosity that will maybe find him suddenly in way over his head.

Thankfully there are, in the end, new friends to be made, and new colleagues to meet, and the launch of a new peril, that both does and does not sound like a threat we’ve been anticipating here for some time in our own universe.

Whatever the connection, it does certainly seem, what with all that is happening in the multiverse in the rest of DC right now too, to be an interesting time for an Anti-matter Lantern to arise on a world, in a universe not Hal’s own, and then go looking for the Green Lantern of Universe Designate 0.

Makes you wonder if that’s about to become a thing.

Good thing there are indeed new friends to be had, and colleagues too. After all it sounds like the Guardians of the Multiverse really ought to be something that Hal Jordan should know about…

Get ready. Here we go.