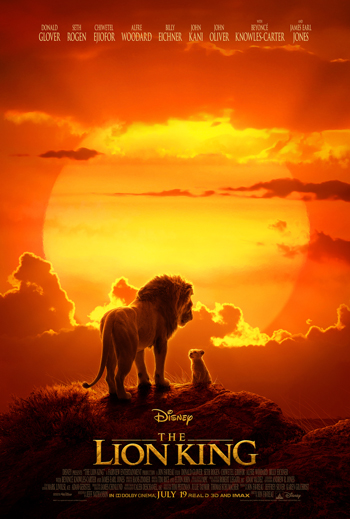 I remember listening to two friends a few months ago on the subject of Disney live adaptations. One was very excited for The Lion King, while the other felt that the goal of realism made it pointless.

While we watched the trailer of Dumbo together, he even pointed to a circus lion in a cage and joked that “Mufasa was making a cameo”.

This has turned out to be a perfect commentary on the limits of live action animal adaptations. While CGI has progressed to the point that much of The Lion King looked like documentary footage, animals are still a tough read when it comes to differentiation and emotions.

What I would have given for some anthropomorphic eyebrows!

To be fair, it is not as if there were any new feelings to suss out. Much of this is a shot for shot remake of the 1994 classic cartoon feature, from the kneeling antelope during the “Circle of Life” to Simba and Mufasa frolicking under the stars. There are times when the playfulness of the original is sorely missed, like during “I Just Can’t Wait To Be King”.

The all-encompassing cuteness of photo-realistic lion cubs just doesn’t stand up to the lightness and fun of Simba and Nala hopping from giraffe head to giraffe head, riding ostriches in an effort to escape Zazu.

This isn’t to say that there aren’t places where live action beats hand-drawn animation. The stampede scene was much more jarring in the new film, as was Simba and Nala’s first encounter with the hyenas. Those moments were more like watching a National Geographic special where you were not sure if a somber voiceover would start explaining that it is simply “nature’s way” instead of a 25-year-old scene where you knew the ending.

Jon Favreau is quite familiar with animal CGI after bringing us The Jungle Book, and has made sure to show off how far the technology has come. For example, a perfectly articulated mouse runs up a stalk of grass, which gently bends while the animal wraps its tail around the middle to steady itself. The whole sequence is almost unsettling in how real it looks, but also breathtakingly gorgeous in its rich detail.

None of these effects would matter without stellar voice casting, and there are far more hits than misses. JD McCrary and Shahadi Wright Joseph are endearing as young Simba and Nala, while Beyonce slightly beats out Donald Glover for best adult version of the two. Glover is just a bit too flat for Simba, and there are a few times during the final battle where what should be an enraged, roaring Simba sounds more like a young adult trying to keep his temper from showing. Nala’s slightly expanded role is not a heavy lift for Beyonce, and she restrains her powerful voice during “Can You Feel The Love Tonight”, though she brings her familiar belting vibrato to new song “Spirit”.

Keegan-Michael Key and Eric Andre garner some chuckles as bumbling hyenas Kamari and Azizi, while Florence Kasumba takes over for Whoopi Goldberg as Shenzi and turns the character from comic foil to bitter leader of the rest of the hyenas. Other updates include Billy Eichner and Seth Rogen’s takes on Timon and Pumbaa, delivering fresh comedy that is more an homage than a straight remake. The one thing that has been consistent in Disney’s recent live action movies is their commitment to spending time to create new comedic bits that breathe life into what would otherwise be recycled punchlines. Their performance really lifts the second act and brings much needed levity to the pacing.

Will audiences be willing to again trade whimsy for realism, nostalgia for retelling, and hand-drawn animation for slick CGI?

While the exchange does leave certain sensibilities wanting, it is all in all an enjoyable send up of one of Disney’s highest grossing films.

But if you are still on the fence, playing the original Lion King soundtrack while watching Animal Planet on mute is a close second.