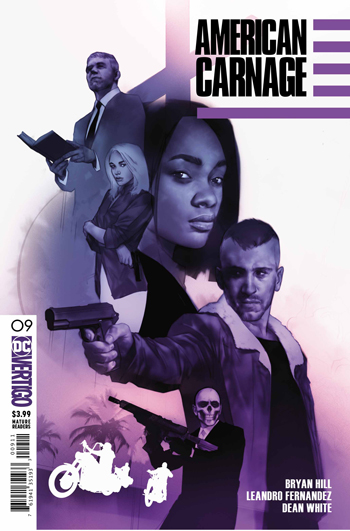 This book had been quite the ride thus far.

It has taken us to some of the darkest places that I have visited in a comic book. I sometimes read this book and I’m just stunned with what the creative team has accomplished here.

This issue is no different and continues and maybe even concludes this horrifyingly nightmarish, yet grounded story.

The opening sequence is full of adrenaline!

Agent Richard Wright makes a furious phone call to Jennifer Morgan. He tells her to grab her daughter and to leave.

Richard plans to kill her father! He figures the only way to really take care of Wynn Morgan at this point is to just kill him. It’s a harrowing opening scene that sets the tone for the rest of the book.

And it only gets wilder from there!

The scene then cuts to a brutal hate crime. It’s hard to watch for sure. The art by Fernandez makes it even more difficult. The scene moves very quickly but it’s emotionally charged for sure. Hill lets the art tell the story and it’s certainly to the benefit of the book.

Then it becomes time for the main event! Richard Wright goes to Wynn Morgan’s place to end his life. But then he is stopped by Jennifer. She is there and tries to talk some reason into Richard. And let me just say, the resolution of this scene isn’t what I expected. It actually may be the most brutal moment in comics for that year 2019. And that’s saying something.

But then, the ending had one more twist to it. And that’s one of the hardest moments this books ever had. I don’t want to spoil it except to say that I was very shocked how this ended.

The creative team is is to commended. I didn’t see this issue’s twists coming at all. But man, I can’t stop thinking about it. This is a book that is truly unmissable.