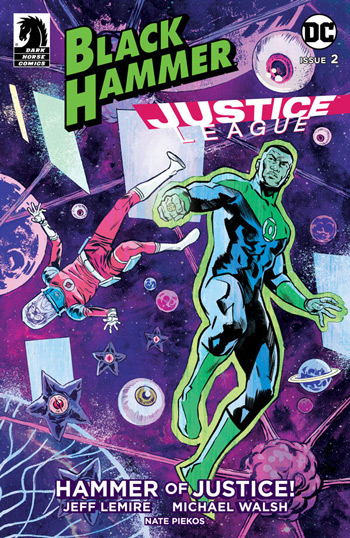 The first issue of this series was completely stunning. I love the way the creative team took these two sets of superhero teams and swapped them out!

It’s a concept that they get a lot of mileage out of! By mixing and matching the two teams, we get new story possibilities and the creators just go for it.

The book opens with Bruce Wayne in the Black Hammer Universe driving in a pickup truck.

It’s a jarring scene for sure. Bruce is trying to deduce where he is and more importantly, how to get out of there. Then, while he’s driving, he gets pulled over by the police. He talks to the police officer and then heads back home to the farm.

He gets back and Clark is there.

Meanwhile on the other earth, the Black Hammer team fights against Starro. It’s awesome to see them come up against a threat that they normally don’t have to deal with. Then, they meet up with some of the remaining Justice League characters which leads into some of that craziest moments of the book.

Colonel Randall Weird has his own adventure as well. He meets up with a very angry Green Lantern Corps. He then escapes and comes across Bizarro. Things get downright strange and fun. I quite enjoyed the places the creative team takes us here.

John Stewart and Colonial Weird then go on a fun adventure. Stewart is trying to get to the bottom of everything. Cyborg is as well. There are a few mysteries and questions that are brought up. Most importantly, just what happened to Barry Allen?

The story is smart and fresh. Lemire really knows what he is doing here. So does artist Michael Walsh. He is one of the best in the business. This book is a delight. I’m sad that it’s only five issues for this story.